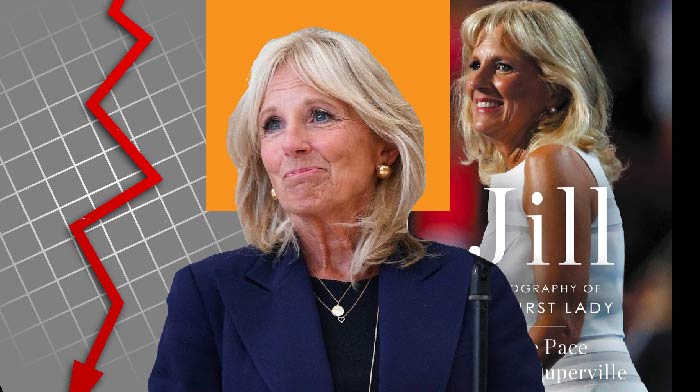 Would you pay $26 bucks to read a book about Jill Biden of all people? I wouldn’t read it if it was free… I guess if it was called “Elder Abuse: How I Abused My Buffoonish Husband” I might read it, other than that, no thank you.

And I guess I am not the only one who feels that way about Dr. Dud Biden… because the new biography that’s out on Jill Biden has flopped spectacularly.

In its debut week, it sold a whopping 250 copies.

Washington Free Beacon reported that the American people are decidedly disinclined to pay $26 for a book about the life of President Joe Biden’s primary caretaker. Politico reports that a recently published biography of Dr. Jill Biden, Ed.D, sold just 250 copies in its first week of circulation.

MORE NEWS: Scoop: GOP Lawmakers Going to “WAR” With Biden to “DECIMATE” His “Ministry of Truth”

The Politico article, which documents the professional anxiety of White House correspondents who find it “boring and difficult” to cover an administration whose policies they wholeheartedly support, cites the poor sales of Jill: A Biography of the First Lady by AP reporters Julie Pace and Darlene Superville as an example of why journalists are so bummed out now that a Democrat is in charge.

Writing a book about former president Donald Trump was a far more lucrative endeavor, and covering his administration was a profoundly exhilarating experience for the journalists who, in their humble view, were “saving democracy.” As Alexander Nazaryan, author of The Best People: Trump’s Cabinet and the Siege on Washington, explained in 2021: “Covering the administration was thrilling for many journalists, in the way that I imagine storming Omaha Beach must have been for a 20-year-old fresh from the plains of Kansas. He hadn’t signed up for battle, but there he was, liberating France.”

They’ll never admit it publicly, but America’s journalists are simply desperate for Donald Trump to run again in 2024. Biden promised to be a boring president, and in comparison to Trump he certainly has been. That’s a really low bar to clear. One might think a president that reporters find so “boring and difficult” to cover would be overwhelmingly popular. He is not, at least among normal Americans. Reporters are simply less inclined to “speak truth to power” when a Democrat is president.

You’d think with those “81 million” votes, her husband supposedly earned, she could scare up more than 250 sales, right?

I mean, if you’re the wife of the most popular politician in our nation’s history, wouldn’t people be clambering to get a copy of the book?

That’s how it would work if Joe actually won 81-million LEGAL votes, but since he didn’t, this would be the more expected outcome.