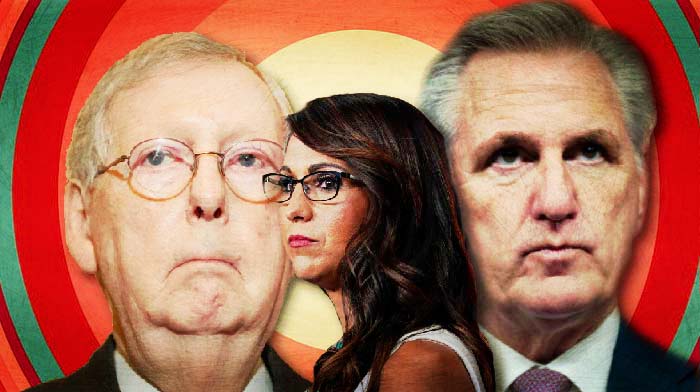 The biggest enemy we have right now isn’t the Dems, believe it or not.

It’s the GOP establishment… Most of you know this already, but it’s worth reminding everyone. Especially right now, in primary season.

There’s nobody that hates “MAGA” more than the GOP establishment. They’d rather see a Democrat in that Senate or House seat than an America First candidate.

And they’re doing all they can this primary season to make sure they take out as many MAGA candidates as possible.

We’re doing the same thing on our side, — we’re trying to take out all the RINOs.

So, right now, we’re in a “war” of sorts. We take some of theirs, and they try to take some of ours… it’s a back-and-forth battle.

Sadly, they got one of our guys in North Carolina.

Madison Cawthorn, a MAGA/America First candidate, who got caught up in some foolish stuff, lost his seat… and the establishment SuperPAC that helped take him down now has their sights on another MAGA candidate…

And they’re ready to take her down.

The fine folks over at Big League Politics broke the story and wrote a great piece on it. Here’s what they said: a Uniparty smear campaign effort, which successfully helped oust America First Rep. Madison Cawthorn in North Carolina earlier this week, is setting their sights next on Rep. Lauren Boebert of Colorado.

The organization, American Muckrakers PAC, is feeling emboldened after they released an edited video of Cawthorn in the days leading to his primary loss. They are now threatening Boebert in an attempt to remove her from office as well.

Wheeler is claiming that he has received “interesting information” about Boebert’s finances, although he admits it is “certainly not as salacious as some of the Cawthorn stuff.” He his PAC’s campaign, FireBoebert.com, will be successful at ousting Boebert during her upcoming June 28 primary.

This is the warning video they sent to Boebert:

Hi @RepBoebert – Ask @RepCawthorn about us. We look forwarding to getting to know you. https://t.co/6s5myrpwxe pic.twitter.com/8phKH4cJpG

We need to get involved in this and fight back… HARD.

Lauren has fought hard for us and we need her in Congress.

It’s time we return the favor and crush these RINOs.