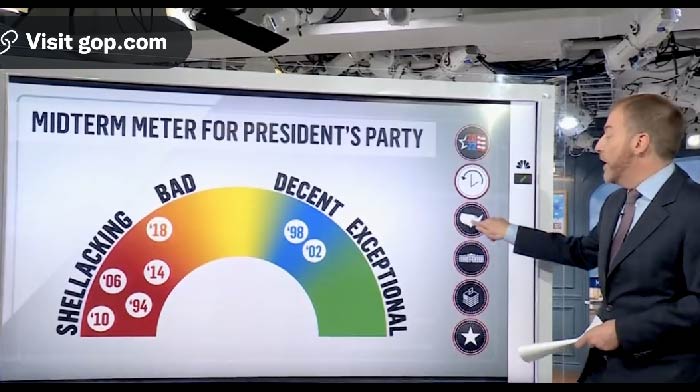 Things are just getting worse and worse for the doomed Dems.

Every time Joe Biden opens his senile mouth and all that gobbledygook spills out, things just get worse and worse for Dems.

I know the media and politicians don’t want to admit this, but the biggest problem the left has right now is Joe Biden’s malfunctioning brain.

The American people can see — plain as day — that Joe Biden looks and sounds like he belongs in a nursing home, not the White House, and that’s a big problem.

I know this might come as a shock to the media, but the American people don’t like the idea of a senile buffoon “running” the country.

Now, add to that all the problems, scandals, and catastrophes that continue to happen, and you’ve got a recipe for real disaster, or as Chuck Todd puts it, a “shellacking.”

According to Sleepy Eyes Chuck, Dems have wandered into some very dangerous political territory, thanks to Biden and their failed policies, and as a result, the 2022 midterms are looking like a political bloodbath.

NBC POLL: 75% of respondents say America is on the wrong track.

Democrats are in “shellacking territory” ahead of the midterms.

We don’t want to get complacent and sit back and just “believe” things will turn out badly for the Dems.

We need to flood the polls like crazy, in order to offset any ballot-harvesting they’re planning.

However, I think the good news in all of this, is that all these “doomsday” predictions are really making it so much harder for Dems to unleash any real “cheating plans,” since all the facts, and news is so gloomy. Any s0-called “shocking wins” would have red flags flying all over the place.