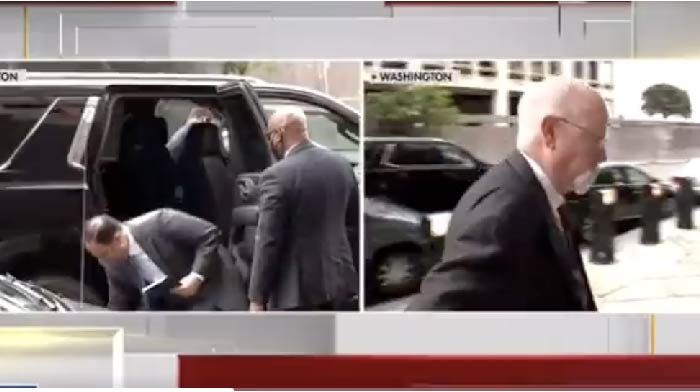 Some people like to say that John Durham really doesn’t exist, that he’s a figment of our imaginations, created just to keep us pacified and believing that “something” is possibly happening.

I mean, I wouldn’t put it past them to do that, so…

I know it might sound like a silly conspiracy theory, but if you’ve ever tried looking for a recent photo of Durham, you’re outta luck, there aren’t any.

All that exist are like two total photos of this guy.

And videos? I found one from 1972 or something.

So, today when I actually saw REAL LIVE footage of Durham walking into a building to do some work, I about collapsed from shock.

Yes, Virginia, there is a John Durham.

And here’s the proof…

Something we don’t see very often…

John Durham out and about 👊 pic.twitter.com/rfK4hhoN42

Trust me, many people were surprised to see this footage.

The guy is more elusive than Howard Hughes.

“OMG, John Durham in the flesh. Spread the word!”

“finally! We get to see John Durham is a real person!!”

“It only took 6 years for this moment.”

“Yo @GettyImages– if you get your cameras down there you may be able to snap your very first photo of the special counselor investigating the political crime of the century.”

“Holy crap he is a living, breathing human being and not just a single picture”

Well, let’s hope this is a good sign that justice is coming soon.