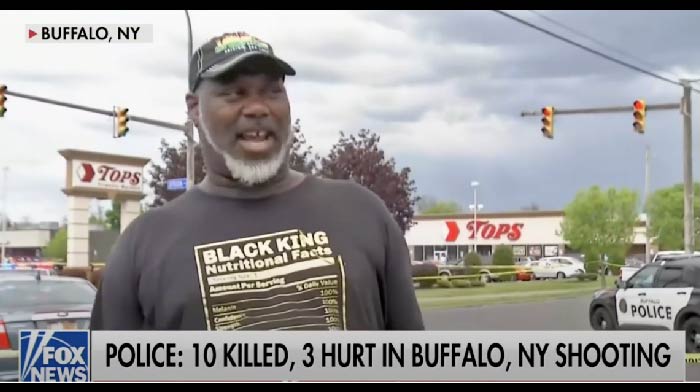 What happened in Buffalo, New York is one of the most disgusting acts of hate, violence, and mental illness I’ve ever seen.

A young man, who had his whole life ahead of him, threw it all away by murdering innocent people, and destroying countless families, including his own, and for what? Some confused, hate-filled agenda that caters to lonely dregs of society?… What a sick and twisted tragedy.

And once again, we’re left asking ourselves, where was the FBI and why weren’t they all over the RED FLAGS that were popping up everywhere on this guy?

Maybe this is why:

The FBI in New York had time to raid James Okeefe and Project Veritas for doing journalism but not to follow up on credible school shooting threats the Buffalo shooter was reported to police for making.

Does it make sense now?

When I think about that loser kid and what he did to those poor innocent people, I wish someone in that store had been packing heat so they could’ve picked him off.

A “good guy” with a gun could have saved a lot of lives that day, and I am not the only one who thinks so.

One witness who was at the scene when the shooting took place is saying the exact same thing.

MORE NEWS: Buffalo Killer Ponders if His Two Vaccine Shots Were Why He Snapped, in Disturbing Manifesto

Town Hall reports that the shooter, a self-proclaimed white supremacist, used an AR-style rifle to target mostly non-white grocery shoppers in a minority neighborhood of Buffalo. A former police officer who was working as a security guard, Aaron Salter, appears to have been the only other person armed during the shooting. Salter attempted to stop the mass shooter but was killed in the process. The shooter livestreamed his actions, where it showed he was attempting to kill as many people as possible.

A witness to the shooting told Fox News it was “ridiculous” Salter was the only person who was armed to stop the shooter at the start of the incident. Salter’s actions is credited with saving lives in the shooting.

You can watch the video below;

We need more good guys with guns and more mental hospitals, too.

This country is overflowing with mental illness right now.

We’ve got an entire generation that’s being pulled in so many directions and facing a lot of left-wing lunacy at a very young age, and as a result, they’re a mess.

We need to focus on getting those people mentally and emotionally healthy so something like this doesn’t happen again.