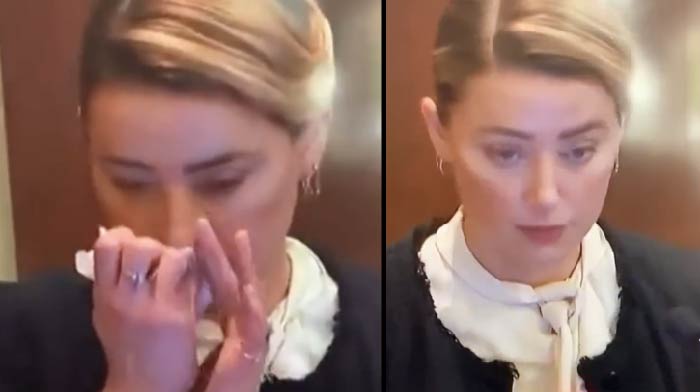 There’s a short video clip that’s gone mega-viral of model Amber Heard on the witness stand, and many people, have a lot of questions and thoughts about what exactly she’s doing during her testimony.

As you likely know Amber Heard is the ex-wife of Hollywood actor Johnny Depp.

The two are locked in a bitter lawsuit right now, because after the divorce, and during the peak of the #MeToo movement, Amber wrote an op-ed for WAPO, claiming she was a victim of abuse. She never named Depp as the abuser, but it was obvious it was him she was talking about.

The op-ed basically destroyed Johnny’s career. He lost all his upcoming parts, including his role as Captain Jack Sparrow in Disney’s “Pirates of the Caribbean.”

He is suing Amber for $50 million.

She is counter-suing him for his $100 million.

Amber is now on the witness stand, and people have a lot of questions about her behavior.

In this one particular clip, many people are convinced Amber did a “bump” of cocaine out of a piece of Kleenex.

It’s no secret Amber and Johnny both did their fair share of drugs.

Here’s the clip in slow motion (2nd video below):

“That’s a coke bump if I’ve ever seen one”

“You can ear the click, its like a little thing made for cocaine like a little bottle thing and you click the button and it shoots up in your nose, my ex used to do that”

“She straight did a bump on the stand. Unbelievable”

“Okay that was clearly coke omg. No one does /that/ movement to clear their nose”

“that’s how you snort coke, that kleenex she keeps doing that with has coke in it!”

“I think it’s a vial snorter. The top has an open close. They’re small, tissue would wrap around it easy”

But not everyone was convinced:

“Where exactly would the blow have been though? Just laying in the napkin?”

No way. I’ve done that plenty of times with a tissue up my nose and it wasn’t coke.

“With my allergies, I understand because I always have one of two nostrils clogged or inflamed. It looks like she was just blowing her nose”

I find it hard to believe that Amber would do something that bold and illegal on a witness stand, but she has a reputation for being emotionally unhinged, and I think that’s what’s fueling this viral rumor.

What do you think?