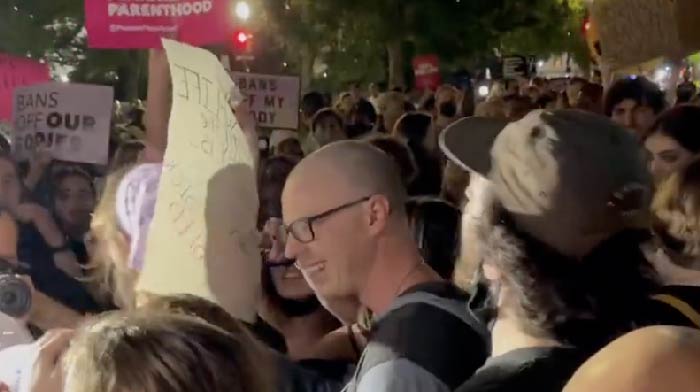 The left is having an end-of-the-earth meltdown right now, over the leaked SCOTUS ruling on Roe v Wade.

The leaked document reveals SCOTUS is ready to overturn Roe v Wade, which was a lousy law to begin with. Just ask RBG and Joe Biden — he actually tried to throw it out back in the 80s.

If Roe v Wade is overturned, it doesn’t mean abortions will be outlawed, as the left would have you believe, it just means abortions would go back to being handled at the state level, which is where they should’ve been all along.

However, it’s not just the ruling that’s the focus right now, it’s also the “leak,” which is obviously a left-wing political nuke.

MORE NEWS: Here’s The “Met Gala” Photo of Hillary With a Masked-Up Black Worker Crouched at Her Feet, Like a Servant

There are two schools of thought on this.

The first is that some left-wing rogue clerk released the brief in order to intimidate the judges and get them to change their minds.

I believe that could be part of it, but I think there’s more.

I think this has a lot more to do with firing up the Dem’s base for midterms than anything else… because nothing says “get your butts to the polls” like a real-life/fear-mongering message about how a Republican majority would take away abortion rights etc. etc. etc.

And one Trump supporter thinks she has the proof that this whole thing was coordinated and planned out, thanks to this video clip.

Take a look… just a short time after the leak was announced massive groups of leftists, with SIGNS, were ready to roll and protest on the steps of the SCOTUS?

Doesn’t that seem a bit odd to you?

Do you really buy that load of malarkey?

“I stand with Planned Parenthood” signs tonight outside of SCOTUS

Who arranged to get those signs to the court tonight?

The leak was clearly a coordinated strategy and effort… pic.twitter.com/W00kfMytBO

Of course this was planned out and coordinated.

I knew the left wouldn’t give up midterms without a fight, and there are still about 6 months to go, so you can bet your bottom dollar that we’ll see more of this kind of stuff before any votes are counted.

Stay the course, and keep fighting… this is going to be a lot harder than we thought.