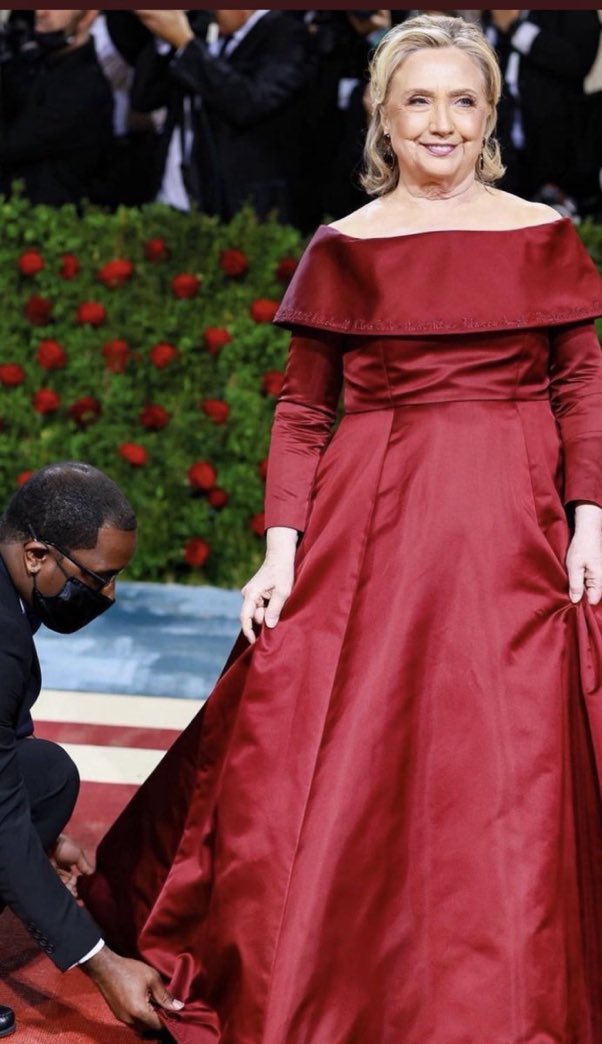 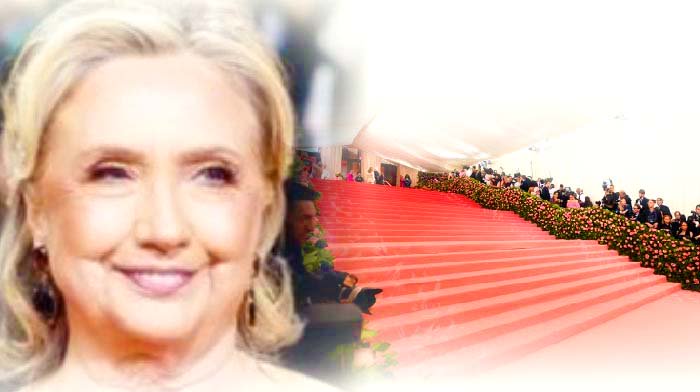 The swanky and every elite Met Gala was held last night.

Only the biggest and brightest elites may attend… so of course, Hillary Clinton was there, in all her silk and finery.

The AP reported that failed presidential candidate Hillary Rodham Clinton was in a Bordeaux-colored gown designed by Joseph Altuzarra with the names of historic women sewn into the hem and neckline. They include Abigail Adams, Shirley Chisolm, and Madeleine Albright.

MORE NEWS: Conservative Pundit Names Exact Day Dems Will Dump Biden and The PERSON Who Will Tell Him It’s Over

Too bad she didn’t sew in the names of all the women her husband sexually assaulted. Is her hem even big enough for that?

Well, speaking of that infamous “hem” on Hillary’s dress, there’s a photo circulating online that’s getting a lot of attention for all the wrong reasons.

It shows “Queen Hillary” wearing her lavish and expensive gown, all smiles, while a black masked-up servant, kneels on the ground, tending to her dress hem, like a common peasant.

Freelance writer James Melville shared the photo with the caption “Them and us.”

Yes… because this photo perfectly depicts the entire COVID “pandemic,” doesn’t it?

The elite running around, doing whatever the hell they want, and never missing a beat, while the masked-up peasants wait on them hand and foot.

Here’s a closeup of the photo:

Here’s what folks online had to say about this image:

“I can’t tell you how disgusted this image makes me feel. It’s a perfect snapshot of our country right now”

“this is the perfect image depicting the privilege I see that politicians enjoy. We are the ones our knees, touching their robes.”

“Does nobody in the Dem party understand optics? I guess they just don’t care that they’re hated by the filthy masses, eh?”

“Garçon, get over here and butter my muffin!”

“Only children and the working class are muzzled. When are you going to see it?”

“Just imagine for one second that this is a photo of Melania Trump and masked black man on his knees fixing her dress. Can you just hear the outrage? But because it’s Hillary, there are crickets”

“Our society has regressed”

“These are supposed to be the politicians of the people? LOL”

“@AOC: I’m going to embarrass myself in a ridiculous gown at a party for the rich elites….#HillaryClinton: Hold my champagne”

Just imagine if this wasn’t a photo of bloated Hillary and instead was graceful, gorgeous Melania with a servant at her feet…

I can’t even begin to imagine the outrage. It would be off the charts.