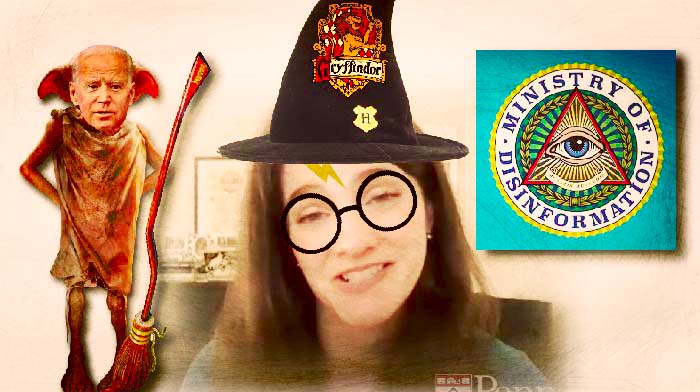 One week after Elon Musk announced he was buying Twitter, Biden’s Handlers unleashed the “Ministry of Truth.” A new government agency designed to weaponize “online disinformation.”

Of course, it won’t really be “disinformation,” will it?

It will be anything that goes against the Regime’s official messaging… We’ve seen this a million times:

MOR NEWS: [VIDEO] Wait Until You Hear The BIG LIE Biden’s “Minister of Truth” Spread About Trump Voters in 2020

You’re only allowed to say the vaccine works perfectly. If you say anything else, that’s “disinformation,” even though the vaccine doesn’t actually work.

If you say Joe Biden has cognitive decline, that’s disinformation, because doctors say he’s healthy and has a childhood stutter, even though he’s a complete mess.

You can’t question Ukraine’s intentions or point out all of their fake propaganda, because if you do that, you’re actually helping the Russians spread disinformation and you must love Putin.

January 6th was a full-blown insurrection and if you don’t agree, you’re an insurrectionist and traitor, too.

There will be no mentioning of anyone’s actual gender because if you do that, you’re committing hate speech, even though what you’re saying is common sense and scientifically true.

If you say Joe Biden tried to shake hands with the air, that’s disinformation, because fact-checkers said he was pointing, even though you can see him shaking hands with air, with your own eyes.

There’s no “wiggle room” when it comes to the left’s “disinformation” campaigns. You either march in lockstep with everything they say, or you will be labeled something vile and evil, and probably end up on an FBI and/or IRS list for boatloads of harassment down the road.

This is the type of nonsense we’ve been dealing with for eons now. Meanwhile, CNN, and all major networks and media outlets are perfectly fine to spread piles and piles of fake news.

We all had to deal with the phony Russia Hoax for 4+ years, the Covington hoax, Jussie Smollett’s fake hate crime, the “Hands up/don’t shoot” lies, and the “Peaceful Summer of Love” BS.

These lies and disinformation have led to people being hurt, killed, and billions of dollars lost, but does anyone care about that?

No, of course not, because all of that stuff I mentioned is propaganda that helps the Regime.

So, we all know exactly how the “Ministry of Truth” (cough, cough) will operate. Likely the same way they used the FBI to go after parents who were simply concerned about their kids being indoctrinated with progressive wokeism in school.

Once something is deemed “disinformation” by the Minister, anyone who repeats it becomes an “enemy,” right?

Well, according to many people out there, this is not only really disgusting, but it’s also unconstitutional, to boot.

“Stop focusing on the weirdo in charge of the Ministry of Truth, and focus on the illegality of the Ministry itself. Our Constitution specifically prohibits weaponizing federal law enforcement to crush dissenting speech.”

I agree with John on almost everything he said here, except for one thing.

I do think we need to focus on the weirdo in charge as well… we can walk and chew gum at the same time, and I know for a fact, that nothing infuriates, hurts, and destroys the communist left more than mocking what they do. Elites can handle a lot – being called hypocrites, liars, cheaters, but don’t you dare mock them, they will crumble into ash.

It’s a weapon the right wields very well, and it’s powerful and works, and we should NOT give that up.

But he’s right, we need our elected officials to be laser-focused on the legality of this.

Let people like me, other outlets, and meme artists mock this woman into oblivion, while our elected officials challenge this nonsense in courts if they have to.