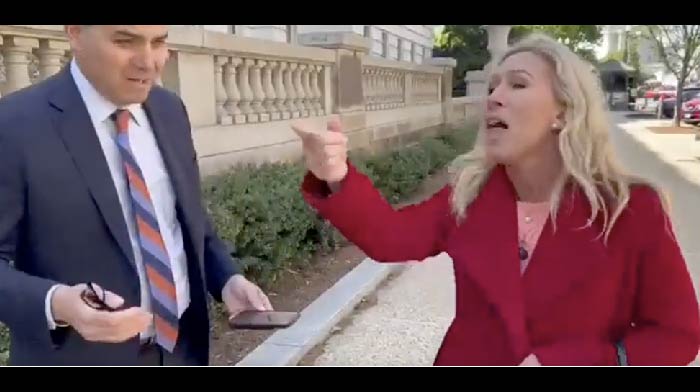 Marjorie Taylor Greene is not one you want to mess with.

I know that a lot of folks on the left try to label her as a ditzy kook, but that’s a mistake, and they always pay for it.

But no one paid for that mistake more than CNN’s Jim Acosta recently, when he approached MTG and tried to “trap” her over a text she supposedly wrote on January 6th about the possibility of Trump imposing “Martial Law.”

Now, the first thing that dunce Acosta did, which just shows that smug eliteness that people hate, is that he pointed out repeatedly that MTG misspelled “Martial” law.

We have a blithering buffoon in office, who can’t string a sentence together, and who shakes hands with the air, and this low-rated bozo is worried about a typo…

That smug, arrogant crap is why America hates our media and really hates CNN.

MORE NEWS: [VIDEO] Wait Until You Hear The BIG LIE Biden’s “Minister of Truth” Spread About Trump Voters in 2020

Acosta then tries to lay a “trap” for Marjorie to fall into — and I don’t know if it’s that Jim just isn’t skilled enough to do that, or what his malfunction is, but the whole thing backfires and makes him look like a two-bit partisan hack.

And what was even worse for Jim, was nearly the entire time, Marjorie just kept calling him a liar, which he is, and steamrolling him.

By the end, he’s just left standing there, with nothing to say.

CNN’s Jim Acosta sets a trap for MTG— BACKFIRES immediately when the Congresswoman hits back.

You gotta figure that the new owners of CNN are looking at this kind of “National Enquire” nonsense, and cringing.

Normal people don’t want to see this nonsense and have fully rejected it.