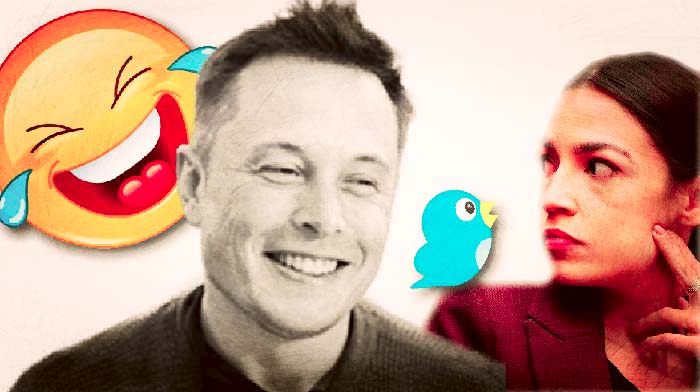 When will AOC learn? She’s just not that smart.

After all, this is the ditzy woman who claims when people criticize her, it’s because they secretly want to “date” her. I mean, if that attitude doesn’t set the feminist movement back 20 or 30 years, I don’t know what will.

So, AOC has a lot to say about others, but can’t handle it when anyone pushes back on her. She’s a typical liberal female millennial, who retreats to her safe place when challenged and blames everything on big, bad men.

MORE NEWS: If Twitter Employees Thought Things Were Bad Now, If Elon Makes THIS Next Move, It’ll Get A LOT Worse

So, it probably was not a good idea for her to try to bash one of the best online trolls Twitter has to offer: Elon Musk, who also happens to be the proud new owner of Twitter, to boot.

But AOC doesn’t know any better, and besides when things go wrong, she just blames her “good looks,” right?

Well, not this time…

AOC took to Twitter where she chastised Elon Musk for his “big ego,” which supposedly made him buy Twitter, and all the impending hate speech that will follow, and also for going to dinner with Tucker Carlson and Peter Thiel.

Well, AOC may have been proud of herself for that petty, teenage attack, but she didn’t have long to bask in her sophomoric glory, because Elon swooped in and delivered one of the best responses ever.

Here’s what he said: “Stop hitting on me, I’m really shy.”

An obvious and hilarious dig at AOC claiming her critics all want to date her.

As I’ve said all along, the best way to bring down these progressive elites is with mocking and humor.

They can’t handle it.

You can call them liars, cheaters, traitors, hypocrites, and communists, and none of that will phase them in the least… but the moment you laugh at them and mock them, they crumble.