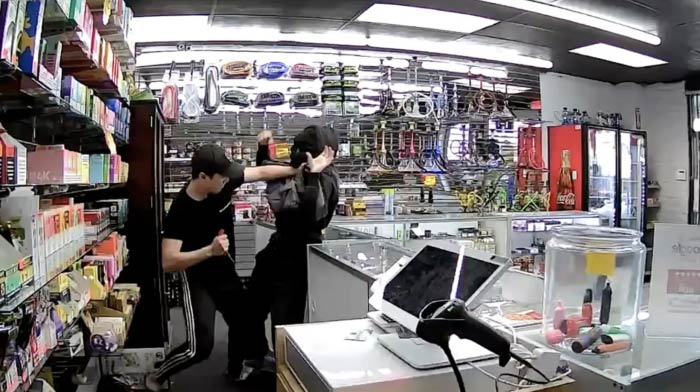 Two masked would-be robbers confronted a young Asían business owner in Las Vegas and he quickly jumped into action. He grabbed a knife and defended himself from the ski-mask-wearing intruders. One robber took off running right away, but the store owner grabbed the other one, who jumped over the counter, and began stabbing him so many times, that the robber cried out, “I’m dead.” Obviously, he wasn’t dead, but he was severely injured.

The New York Post reported that a Las Vegas vape store owner repeatedly stabbed a crook who frightened him by jumping over his counter during a botched robbery, according to video and the worker’s account of the incident.

Video footage showed the brazen broad-daylight heist on Wednesday, in which Johnny Nguyen, owner of Smokestrom Smoke Shop, stabbed the unidentified assailant at least seven times before the robber yelled, “I’m dead” and fell to the ground.

Las Vegas Metropolitan Police Department officials told The Post that cops responded Wednesday afternoon to a robbery incident at the vape business but would not release further details.

“I was scared for my life,” Nguyen told The Post on Friday. “When they came in, one of them had a bag in front of him like he had a firearm or something. I didn’t have much time to think. I grabbed my knife right next to the register.”

Nguyen, 22, said it was around 3:25 p.m. on Wednesday when two men wearing black ski masks entered his shop while another stood by the door. Video footage showed Nguyen asking the two suspects why they were wearing the ski masks.

When Nguyen asked them to leave, one of the suspects grabbed the tip jar.

The other suspect, who is 17-years-old, jumped the counter, and Nguyen grabbed a knife and stabbed him about 7 times.“Stop, please! I’m dead! I’m dead,” the would-be robber said as he collapsed to the ground.

“I remember him saying, ‘Please don’t let me die,’” Nguyen said. “He said he was sorry. By that point, he took off his mask himself. I was trying to get on the phone with the police when he was trying to talk to me. I just ran and wanted to make sure the police and ambulance would get here on time.”

Politicians have forced store owners to take law and order into their own hands. pic.twitter.com/VXnY6iJEKH

Nguyen, who turns 23 on Saturday, said he is thankful that he survived the ordeal. He said the incident left him “shook” and he plans to look into arming himself with other weapons for protection.

“Small business owners like us, this is our livelihood,” Nguyen told The Post. “Not only are they threatening our lives, but our livelihood, so we have to stay vigilant.”

I hope that kid will be okay, and I hope that he and his friend learned a huge lesson and will turn their lives around.