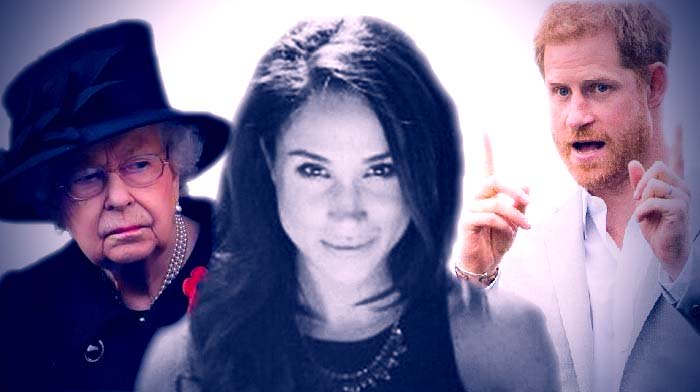 I know many people read this stuff and think it’s just silly gossip, and most of the time it is. But when it comes to the Royals and Meghan, I believe 100 percent that they can’t stand this woman. It’s actually amusing when people try to claim there’s no riff. How could that possibly be true? Meghan has gone through that family like a bulldozer and demolished everything in her path. She is the woman who took Harry away from his family, and the woman who accused the Royals of being “racist” bullies on national TV.

And anyone who thinks Queen Elizabeth, who spent her entire life maintaining the royal “brand,” isn’t deeply bothered by that, is nuts.

So, when I saw this latest report, which claims behind the scenes that Queen Elizabeth knows exactly what Meghan is up to, and absolutely hates her for stealing away her beloved grandson from her, I figured it was pretty spot-on.

OK! Magazine reported that even though Prince Harry and Meghan Markle made a trip to the U.K. in April to visit Queen Elizabeth, it seems like the matriarch is still less than pleased with her grandson’s wife.

“Her Majesty believes Meghan and her publicity-obsessed antics pose a real threat to the monarchy,” a senior courtier reveals. “As she faces her final days, Elizabeth detests this self-centered newcomer for tearing Harry from his family to start a new life together in America. The truth is it’s the Hollywood life Meghan always dreamed of for herself — and Harry is her meal ticket.”

“I’m told the Queen had suspicions early that Meghan couldn’t accept the royal rulebook, but gave her a chance — many chances,” the courtier explains. “She hates that the Duchess of Sussex betrayed her. Now Meghan seems set to user her title for an ambitious career in politics — a total no-no for British royalty. ”

The 96-year-old is even talking about Meghan, 41, to her staff. “I’m told Her Majesty has run out of patience with the woman who keeps thumbing her nose at the royals,” says the source. “And she’s letting it be known behind palace doors.”

“She was outraged after Meghan accused the royals of being cruel, uncaring racists and dissed Prince William’s wife, Kate, in that bombshell CBS interview,” says the palace source. “She retaliated with three words — ‘recollections may vary’ — subtly suggesting Meghan was lying. And she didn’t even try to hide her glee when Meghan snubbed Prince Philip’s funeral last year. ‘Thank goodness Meghan is not coming,’ she told her aides.”

“The new revelations are no surprise at the palace,” dishes the royal insider. “Meghan’s been pegged as a ruthless social climber who’ll do anything to get to the top. Her Majesty whispers she’s a Hollywood nobody without her royal title and connections. I’m told the Queen’s dying wish is for Harry to come to his senses and ditch Meghan. It’s the only way he can ever go home again.”

I mean, this can’t come as a surprise to anyone? Meghan Markle is a one-woman wrecking ball, who has sullied the name of the Royals, even more than it already was, thanks to other scandals and that perverted pedo, Prince Andrew.

But the Queen is right… Meghan will use her Royal fame, and Harry’s money to push her political career because it looks like acting is probably out.