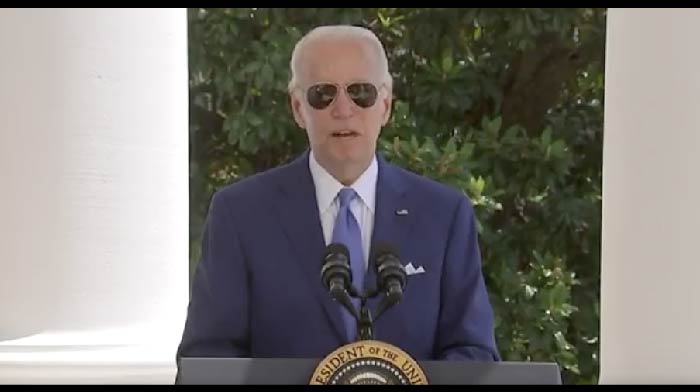 They need to stop dragging this man out. I don’t know if it’s the COVID (yes; he tested positive again today), but he looks and sounds worse than ever. Yesterday, they dragged him out, and he looked and sounded like death warmed over, and he called himself the “vice president” again, although he corrected himself. Yay Joe 🎉 Today, they drag him out, and he looks and sounds even worse, and again, he appears to not know who the president is. I mean, I agree, he’s not the “real” president, even so, he’s the “acting” one, and doesn’t seem to realize that.

Just listen to how sickly he sounds, and you can see how frail he is. I don’t even know how he’s standing up by himself, at this point. I think they’re having him deliver these speeches outside, so they have an excuse to put those godforsaken aviator sunglasses on him to hide his sickly eyes.

BIDEN: “Helping you do that is my job. That’s the president’s job as well.”

Would someone mind asking Joe who he thinks the president is?
pic.twitter.com/kXj9jBC32j

“He thinks someone else is president? Is that what this idiot just said?”

“He doesn’t know where he is or what he’s doing.”

“Why do the Handlers keep putting him in front of cameras when he looks like he’s about keel over any second?”

“Actually, alot of Americans are focused on how much they hate you.”

“They’re gonna kill him with Covid. The theatrics this time around are pretty funny”

“You have done the exact opposite! Typical whenever the Degenerate Dems are at the helm! But you are the worst I have seen in my lifetime. I just pray our beautiful country can survive after you are gone!”

“Does he know he’s still supposed to be the President?”

“So who’s the president then?”

“If this is what YOU can help, please stop.”

“This poor guy is dying in front of us”

I agree Joe is looking and sounding awful.

I don’t know how serious his COVID is, but I do know that Joe suffers from a disease called GERD, and studies show that GERD makes COVID more “deadly.”