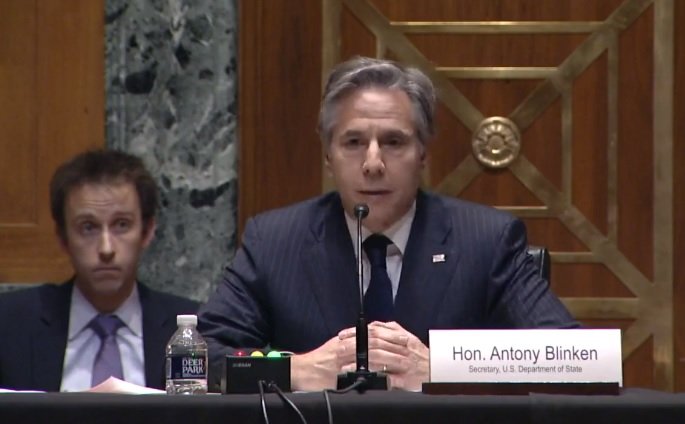 Biden’s Secretary of State today shared that the US does not agree with Taiwan’s independence.

The Biden regime changed the “US fact sheet” on Taiwan in May and removed previous language that said “the United States does not support Taiwan independence.”  This change in official policy upset the Chi-Coms.

Since switching diplomatic recognition from Taipei to Beijing in 1979, Washington has committed to a one-China policy under which it recognizes Beijing as the “sole legal government of China.” But the policy allows unofficial ties with Taiwan and provision of assistance to help the island maintain a sufficient self-defense capability.

Washington maintains an ambiguous position regarding the use of military force in response to any Chinese attack on Taiwan, a policy aimed at both deterring China from invading and dissuading Taipei from seeking independence.

The State Department’s fact sheet on Taiwan relations had previously stated that the United States does not support Taiwan independence.

But the language was removed, along with a phrase that Taiwan is part of China, following an update posted online on May 5. Price said such updates are made “regularly.”

“The fact sheet had not been updated in several years…I think we care most about ensuring that our relationships around the world are reflected accurately in our fact sheets,” Price said Tuesday.

The Taiwanese Taipei News also reported on the updated US policy at the time.

In the updated version, the statement mentioning Taiwan as a part of China has been removed, and the document now opens with the statement: “As a leading democracy and a technological powerhouse, Taiwan is a key US partner in the Indo-Pacific.”

“The United States and Taiwan share similar values, deep commercial and economic links, and strong people-to-people ties, which form the bedrock of our friendship and serve as the impetus for expanding US engagement with Taiwan,” it says.

The new version still acknowledges that the Taiwan-US relationship is unofficial, and says that the US “has a longstanding one China policy, which is guided by the Taiwan Relations Act, the three US-China Joint Communiques, and the Six Assurances.”

But today Tony Blinken backtracked from the State Department’s updated fact sheet.  Biden’s Secretary of State Tony Blinken told reporters that the US does not support Taiwan’s independence from China. The Daily Mail reported:

Sec. of State Antony Blinken issued a stark warning Thursday morning that the threat of China will ‘test U.S. diplomacy like nothing we’ve ever seen before’ – but insisted America does not want another Cold War and does not support Taiwan independence.

He also said in the speech at George Washington University that China’s cooperation with Vladimir Putin after his invasion of Ukraine ‘raises alarm bells’, Beijing under Xi Jinping has ‘more repressive at home and more aggressive abroad’ and accused the communist party of trying to undermine global order.

Blinken laid out the Biden administration’s policy towards China after the president raised eyebrows by saying the U.S. would get involved ‘militarily’ if there was an invasion of Taiwan.

Blinken has a very suspect past.  Perhaps this is why he is happy to turn Taiwan over to the CCP, Blinken’s parents are close with George Soros.

The Biden regime got called out and they faltered.

Americans don’t appreciate the fact that every move the Biden Administration makes helps China and hurts the US.  Freedom is not part of the Biden agenda.  This is not hyperbole, this is serious.

Blinken refused ro punish China for the Wuhan pandemic that killed over a million Americans and created an economic catastrophe.

After Getting Destroyed by China Last Week, Secretary of State Blinken Is Willing to Let China Get Away with the Deaths, Trauma and Economic Destruction They Caused from the China Coronavirus (COVID-19)

Blinken also left Americans to fend for themselves in Afghanistan after he gave the country to the Taliban terrorists.  This was a national shame.

The Biden regime is weak.  They are not fooling the international community, only the mainstream media.

The post Biden’s Secretary of State Tony Blinken, with Family Ties to Soros, Backtracks From Recent State Dept. Declaration and Says the US Does Not Support Taiwan Independence appeared first on The Gateway Pundit.