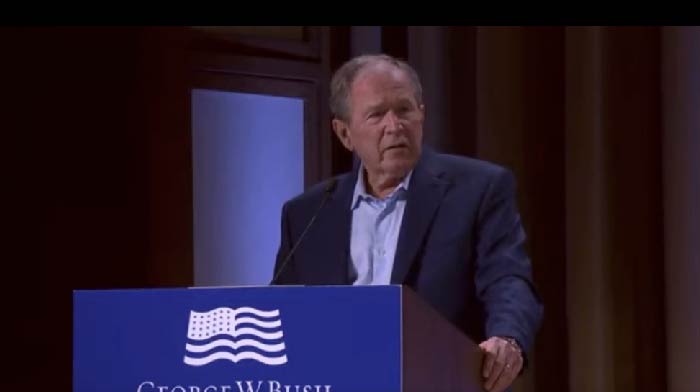 In the end, evil always reveals itself. The monsters come out of the closet, and they show themselves for who they really are.

And that’s exactly what happened to globalist and traitor George W. Bush.

This warmonger finally admits the truth, albeit through a Freudian slip.

While he was speaking at the George W. Bush Institute, he had a moment of clarity. Yes, he was trying to bash Putin (his longtime friend, by the way) and make him sound like a war-crazed monster, but in the end, George accidentally outed himself.

See, in the dark corners of GWB’s mind, he knows he’s just as guilty as Putin, and he has just as much blood on his hands.

That’s why he added, “well Iraq too…”  He knows and it probably haunts him every single day.

Here’s what happened: “Former President George W. Bush: “The decision of one man to launch a wholly unjustified and brutal invasion of Iraq. I mean of Ukraine.”

Yikes. Way to out yourself, George…

Former President George W. Bush: “The decision of one man to launch a wholly unjustified and brutal invasion of Iraq. I mean of Ukraine.” pic.twitter.com/UMwNMwMnmX

“he has the same kind of blood on his hands, of the Americans he sent off to die, of slaughtered civilians, of the Christians in Iraq who were kidnapped, raped, and murdered in his wake.”

“Give that man a jab he came down with Biden Syndrome”

“Clown world is imploding on all fronts”

“All the globalists are getting outed. This is glorious to watch”

“The first was a slip. The, “well, Iraq too” was an unapologetic admission of guilt.”

“He’s probably been DYING to say it.”

It’s as if God himself is pulling off the masks and these ghouls have nowhere left to hide.

Let’s hope this keeps up… the truth will set everyone free.