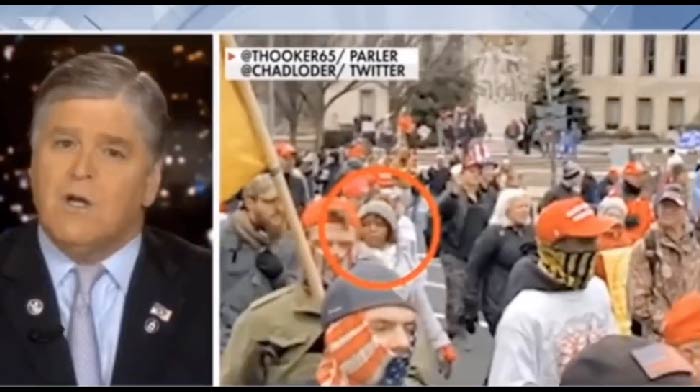 If you’re a Trump supporter, you should know, with no one telling you, that criticizing patriotic Americans for being at the January 6th rally is a big no-no.

There were over 100K people at that event, which by all accounts was mostly peaceful.

Yes, there was an outburst, but given the number of people who were there, it was rather calm… and most of the people inside the Capitol were invited in by the cops and were very respectful, and behaved like tourists.

The only horrific incidents involved unarmed Trump supporters being killed by cops.

So, to suggest that someone who was at the event is somehow “bad,” is wrong, and that’s a nasty, underhanded tactic the left uses.

But that’s what many MAGA supporters are saying Sean Hannity just did when he ran this bizarre hit piece on Kathy.

He made it sounds as if Kathy, walking down the street near some Proud Boys, makes her a “bad” or “questionable” person.

This is Nancy Pelosi and Liz Cheney-level stuff.

Fox News is not your friend. pic.twitter.com/CUDebQ53BV

Now, I want to make a point here that I think is fair…

Many conservatives who are against Kathy Barnette winning the primary, including Trump, are concerned that she can’t win the general.

I get it that a lot of online MAGA folks support her, but the concern is that MAGA is not a big chunk of that particular district, so her winning there, could be very tough.

PA politics can be “weird.” In some areas, MAGA doesn’t resonate like it does in other red areas.

I get that — I am from Utah, and I know MAGA doesn’t resonate in some areas there, as well.

And the left, who are downright nasty, will beat her up good, and some worry they have a lot of “material” to work with.

This is the concern, and I think it’s okay to talk about it and debate the issue.

However, that should be done without pushing left-wing “January 6th” talking points.

RELATED: Sean Hannity Has a Really Big “MAGA” Problem On His Hands

Hannity is dealing with a big “MAGA” problem right now, and while I know he’s not a “Barnette” supporter, I think it’s important to find better ways to argue your point, especially when you’re already in the doghouse with a huge chunk of the base.