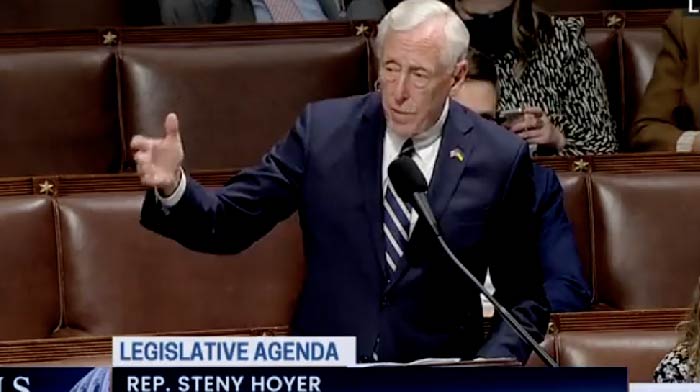 There’s no way House Majority Leader Hoyer meant to say what he did.

It was a slip of the tongue.

Something that accidentally flew out of his mouth in a moment of passion.

And Dems are very passionate right now… passionate with frustration, that is.

Hoyer and all Dems are growing more and more frustrated with how unpopular Joe Biden is… The American people can’t stand the arrogant, senile old jerk and his radical failed policies.

GOP lawmakers have been forced by their constituents to fight back and hammer away at Biden and his agenda, and that combined with right-wing media, social media, and bad polls is putting a lot of Dems in a cranky mood — especially when they think everyone should be “rallying” around Biden right now.

And why would they think that?

Well, that’s where Majority Leader Hoyer’s “slip of the tongue” comes into play.

Yes, that’s right… The majority leader of the House just told the world that we’re at war…

So either I missed the “official declaration of WAR,” or we just got a sneak peek into the Dems secret Russia plot…

Here’s what he said: “It’s it unfortunate that in a time of war, we spend all the time blaming our own president.”

“It it unfortunate that in a time of war, we spend all the time blaming our own president.” pic.twitter.com/iOUocSBX52

Nice to know, thanks for making it official Hoyer.

“Congress and the president have been conducting a full scale war effort without declaring war.”

“Wait, we declared war? With whom?”

“Does he know we are not at war … Or, Is he admitting and confirming That the USA is at war with Russia.”

“We are certainly NOT at war with Russia or any other country. And we don’t want that either. So either he started to deteriorate mentally or he’s speaking out about the lib-dems secret agenda…”

“This is why you can’t have 82 year olds in office. They have no idea what they are even saying”

“Since when did we declare war?”

“Quite telling. I didn’t know “we” were at war. I did actually, by proxy.”

“We’re not at war. Our fake president seems to think we are so yeah.”

“Democrats trying to suck America into another war. Is anyone shocked?”

Did you know we’re at war?

Well, many figured this was actually happening — a proxy war with Russia, which will lead to WW3 if we don’t get this demented old fool and his admin out of office, or for now, at least cut their power off by taking control of Congress.