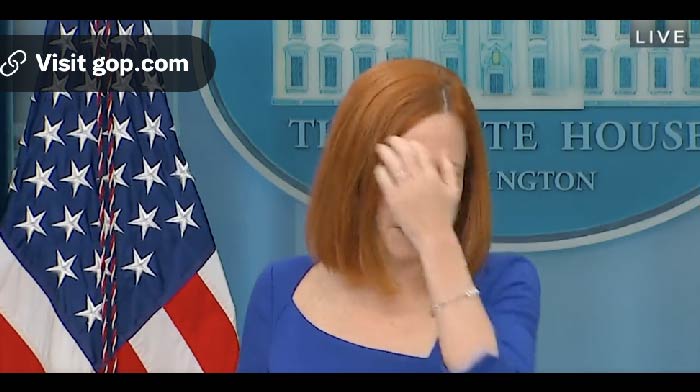 What a way to go out — like a disheveled bat out of hell.

That’s how Jen Psaki signed off during her last press briefing, and if you ask me, it couldn’t have been more perfect and fitting.

Psaki is leaving to go to MSNBC, where she can continue to spread her lies and fake news, and probably make more money, while she’s at it.

Her replacement is Karine Jean-Pierre, and Tucker thinks she’ll actually be worse than Jen, which is quite an accomplishment. Jean-Pierre is a “Russia Kook.” She believes the 2016 election was stolen by Vlad, and she also believes Stacey Abrams is the “legit” governor of Georgia… oh, and she thinks Fox News is “racist.”

Yeah, we’re in for a bumpy ride with that nutbag.

MORE NEWS: [VIDEO] Dem Majority Leader Just Had a Crippling “Slip of the Tongue” About Their Secret Russia Plot

And speaking of bumpy rides, as I said, Jen’s final presser turned into a chaotic mess.

One female reporter was busy blowing smoke up Jen’s bum, thanking her for her “service,” and throwing softball “baby formula” questions at her, while another reporter named Simon, was shouting over everyone and causing a huge ruckus.

Much like the Biden administration, Jen Psaki’s final briefing is a train wreck pic.twitter.com/t8tjpXCnjz

What a perfect way to send Jen packing!