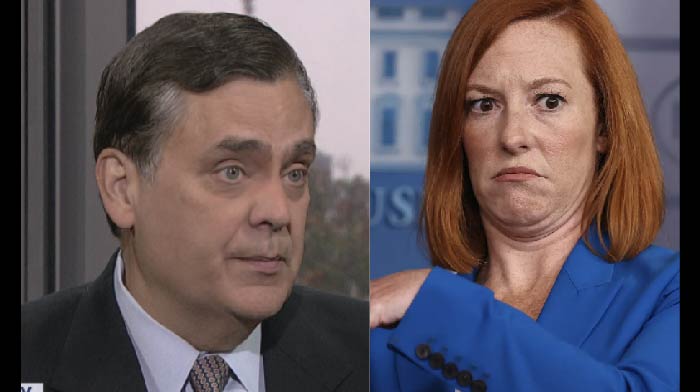 I think it’s fair to say that Jonathan Turley is not a fan of Jen Psaki.

As a matter of fact, he’s been hammering her for being a hack for a couple of days now.

Turley is utterly disgusted at how the Biden admin — namely their spokeswoman Psaki — has handled this SCOTUS leak and subsequent “harassment and intimidation” protests from the left-wing nut jobs.

The left doxxed SCOTUS justices and sent angry mobs to their houses to protest a ruling on Roe v Wade that was leaked to the public.

And MAGA is supposed to be the most “extreme” political movement on the planet?

Trying to intimidate judges to change their ruling is a federal offense, yet the media and Dems are treating this like it’s a beautiful celebration of “womanhood roaring back.”

Meanwhile, January 6th defendants are rotting in jail for politely walking down the halls of the Capitol building.

You see how this game works…

When the protests first started, and Psaki was asked about the White Houses’ stance, she shrugged it off and said she didn’t have an official US government position on where people protest.

MORE NEWS: UH OH…Biden’s New Press Secretary Just Started and Already Has Some ‘Splainin’ To Do….

Well, since that time, Justice Alito has been evacuated from his house and moved to a secret location, thanks to the death threats from violent left-wing radicals.

However, Professor Turley is not impressed… too little, too late, by his standards.

Here’s Jen’s backtrack: “.@POTUS strongly believes in the Constitutional right to protest. But that should never include violence, threats, or vandalism. Judges perform an incredibly important function in our society, and they must be able to do their jobs without concern for their personal safety.”

And here is Turley’s response: “Days late Jen Psaki finally had a “position” to share from the President in aftermath of the fire bombing of a pro-life office. It is long delayed and short on specifics, including any reference to leaking or doxing.

Days late Jen Psaki finally had a “position” to share from the President in aftermath of the fire bombing of a pro-life office. https://t.co/0M8UB5DuK8 It is long delayed and short on specifics, including any reference to leaking or doxing.https://t.co/lX05LUCI0x

Let’s be clear… This is exactly what Biden and his cronies want… they want to see their crazy base out there in the streets foaming at the mouth.

This is their only sliver of hope that their base will show up in semi-decent numbers for the midterm vote.

So, while Jen feels like she now has to condemn the “violence” and intimidation, she’s doing so very “lightly,” and without a lot of gumption because she doesn’t want anyone to give up and stay home.