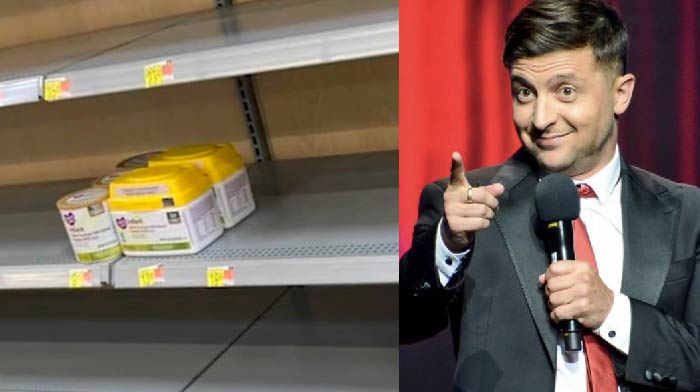 Baby formula has been disappearing off US store shelves for a while now.

Back when all of us on the right were calling out Biden’s bare shelves, and Dems and the media called us “liars,” the baby formula was depleting.

We all saw it happening…

But now, we’re at a crisis level, because once again, instead of addressing an issue, Biden’s inept team pretended there was no problem and just kept shoveling piles of money into Ukraine.

CNN reported that For months stores nationwide have been struggling to stock enough baby formula. Manufacturers say they’re producing at full capacity and making as much formula as they can, but it’s still not enough to meet current demand.

That rate increased another 9 percentage points in just three weeks in April, and now stands at 40%, the statistics show. In six states — Iowa, South Dakota, North Dakota, Missouri, Texas and Tennessee — more than half of baby formula was completely sold out during the week starting April 24, Datasembly said.

And although seven states had between 40-50% of baby formula products out of stock as of early April, 26 states are now struggling with supply.

Every time you turn around, billions more US tax dollars are flooding into Ukraine.

Wouldn’t you like to see an itemized list of what Zelensky is spending all this money on?

MORE NEWS: Charlie Kirk Has a Brilliant Plan For Every GOP Lawmaker Who Won’t Talk About “2000 Mules”

Most people would say an itemized list doesn’t really exist because this is just a big money-laundering scheme for the Dems and military-industrial complex who were bled dry when President Trump was in office.

This time, they’re offering to send nearly 40 billion… after they just sent him $33 billion, and hundreds of millions more on top of that.

Are you working overtime at your job to pay your fair share to Ukraine? You better be…

Bloomberg reported that Democrats have drafted a $39.8 billion Ukraine aid package and plan to vote on it this week without attaching Covid pandemic funding.

President Joe Biden told lawmakers to separate the two requests to avoid stalling the Ukraine money. The House could vote as soon as Tuesday on the Ukraine package, which is larger than the $33 billion Biden requested from Congress last month, according to people familiar with the plans. Lawmakers are adding $3.4 billion in military aid and $3.4 billion in humanitarian assistance.

“We cannot afford delay in this vital war effort. Hence, I am prepared to accept that these two measures move separately, so that the Ukrainian aid bill can get to my desk right away,” Biden said in a statement.

The decision to move quickly on the Ukraine aid, which has been stalled in the Senate amid a dispute over immigration, comes as the Biden administration warns that funding for the drawdown authority the president has used to send weapons to Ukraine would run out by the third week of May.

It’s a never-ending gravy train heading to Ukraine, while Americans at home suffer.

This is called “America Last,” and this is exactly why we fight so hard against the globalists.

So, this tweet asking how much baby formula $40 billion would buy, has understandably gone viral.

How much baby formula would that 40 billion dollars Joe Biden is sending to Ukraine pay for?

“Trump would have dealt with both issues the right way.”

“NO, they are trying to kill our babies one way or another. But, as I said to the mothers who can’t find baby formula use 1% milk. That has more protein.”

“Yep. We/middle class, are last on the list in The Biden Administration.”

“Biden is more into paying for the world’s abortions than feeding the youngest. #HumanTrafficking #BiolabsInUkraine Russia fighting USA in Ukraine, not Ukraine fighting Russia.”

“Biden has always been a liar and a stooge. Now he’s promoting baby formula deficits to prove he’d rather protect his China Big Guy cut than American babies”

“I think a LOT of us are wondering the same thing. Please, answer this question by flooding the midterms polls. Let’s make it a red avalanche”

“You see, if Ukraine hadn’t been lining the pockets of the Biden family for years, we wouldn’t be sending all our money there now or be on the verge of WWIII. This is political money laundering and payback. 10% for the big guy.”

“This is America LAST”

“Anyone who doesn’t believe this is a money laundering operation needs his or her head examined.”

“Gee… At least enough to supply every Baby in Our Country…FOR FREE…Are you paying attention yet America???…”

This is the weirdest “war” I have ever seen.

The very expensive “green screen” war…. we’re funding that, while US mothers and babies suffer.

If that doesn’t piss you off, I don’t know what else will…