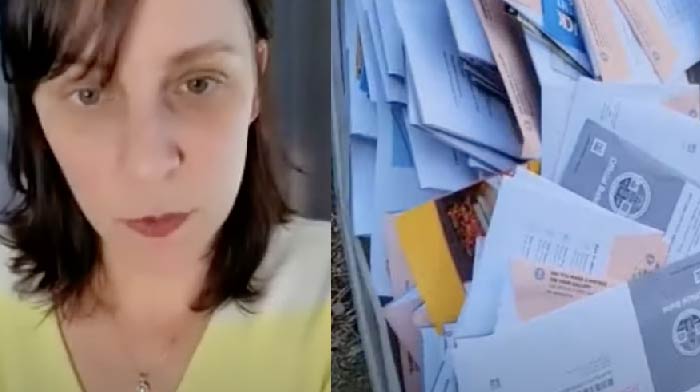 Doesn’t that sound safe and secure?

Well, that’s what happened to a woman in East Hollywood, and once again, it calls into question why on God’s green earth we’re allowing these ridiculous mail-in ballots, which are nothing more than a ballot-harvesting scheme, and everyone knows it.

There is zero security or election integrity when it comes to mail-in ballots and they’ve become a tool Dems use to cheat… and now, a big box of them are just sitting randomly on a street corner, for no apparent reason.

Fox 11 L.A. reported that the Los Angeles County Registrar’s Office and the United States Postal Service are investigating after 104 ballots were found unopened on the sidewalk in East Hollywood.

The ballots were found by Christina Repaci, who was walking her dog Saturday evening.

“I turned the corner and I just saw this box of envelopes, and it was a USPS box. I picked some envelopes up and I saw they were ballots,” said Repaci.

Repaci said she took them home for safekeeping while trying to figure out what to do next. She sent videos of the ballots to popular social media accounts to share the content and ask for guidance on next steps. Repaci said she called several politicians and the LA County Sheriff’s Department.

“I actually called the Sheriff’s Department. I couldn’t get through, so I emailed them,” she said. “I got an email back from a deputy basically in so many words saying it wasn’t their problem, and to contact the USPS.”

Repaci said after much back and forth, the LA County Registrar’s Office got in contact with her about picking up the ballots. Registrar Dean Logan personally drove to pick up the ballots.

“He (Logan) picked them up. I made sure he was legit. He gave me a card, and took a photo of the box,” she said.

Repaci described the process as “stressful.”

MORE NEWS: WARNING: Top US Pollster Just Identified One And Only Thing Dragging Republicans Down in Midterms

“It was so much stress and for just one person to get back to me. What do I do here? Now if it happens to someone else, they don’t know what to do. They’ll just put them in a dumpster or throw them in the trash. I just don’t think it should have been this hard to figure out what to do with legal ballots. This is a country of freedom and our votes should matter and something like this should never happen,” said Repaci.

“Is the postal service delivering ballots by the hundreds directly to the mules now to help them save money on fuel?”

“This is election fraud! I call on all local election officials to get the voter rolls cleaned and confirm no person on that list has moved or died and investigate these stories thoroughly when the complaint is made. Not after the election. Please show us this election is fair.”

“How do our deal leaders expect us to have faith and trust in our elections when crap like this keeps happening?”

“So what’s the big deal? I mean it’s only 100 ballots. This is what #Dems call #ElectionIntegrity LOL”

“Mules are back, everyone. Here we go again”

“We won’t have another fair election until this mail-in-ballot nonsense is stopped.”

“America has the mOsT sEcUrE eLeCtIoNs everrrrrr…give me a break”

“Mail in voting has no integrity.”

How will this give Americans a sense of “security” and “integrity” in their elections?

It’s like a goofy Banana Republic, for crying out loud.

Dems are bringing us back to the “dark ages” of voting, and I think we all know exactly why… it’s the only way they can win at anything.