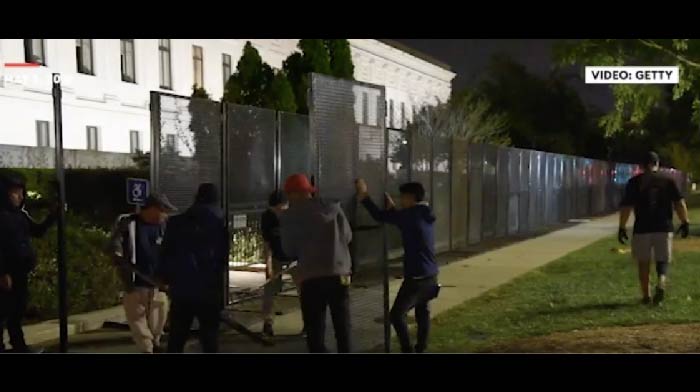 Boy, when the fencing when up around the Capitol, that’s all we heard about for eons.

Breathless coverage on how the fence was needed to keep dangerous MAGA people out… all those dirty, violent “insurrectionists.”

There were hours of B-roll footage shot and aired of the fences surrounding the Capitol, and after it finally came down, every time there was another so-called “threat” and it had to go back up, it was national “breaking news.”

The media sure loved talking about that fence.

But something very strange and curious has just happened.

Protective fencing was just put up around the Supreme Court after crazed left-wingers were going banshee and threatening to assassinate the justices and burn down the building — and now suddenly, nobody in the media cares about fencing anymore.

There’s no breathless coverage, and panel after panel of partisan pundits talking about the danger and the fencing…

What gives? What happened?

MORE NEWS: [VIDEO] Whoopi Goldberg Says Her “Child” Will Help Decide If She Has An Abortion Or Not

Gee, I wonder why they stopped talking about fences?

“How ironic when the left protests, it’s called a protest. When the right does it, it’s called an insurrection. Pretty sure if Roe V Wade gets put back to the states, there won’t be peaceful protests anywhere. Just the thought of it and the lefties are freaking out.”

“Looks like the left knows how violent and crazy their base is.”

“They need that fence to keep all the MAGA extremists out. Oh, wait, this time it’s Schumer and his mostly peaceful bunch.”

“hmmm..a fence securing out border is ‘a monument to white supremacy’ but apparently this fence is ok”

“Sure had that fence ready in a hurry! I know of no agency that works that fast. It’s almost like it was planned? hmmmmm”

Here’s what Rep Boebert said about the new fencing:

“The fence around the Supreme Court right now has nothing to do with right-wing extremism and EVERYTHING to do with the Left being a violent bunch of lunatics when they’re told they can’t murder babies.”

The fence around the Supreme Court right now has nothing to do with right-wing extremism and EVERYTHING to do with the Left being a violent bunch of lunatics when they’re told they can’t murder babies.

Yep, I think Lauren perfectly summed up why the media isn’t reporting on this particular fence.

It doesn’t suit their political narrative.

See, our media doesn’t care about what the left does, they could kick puppies off a cliff, and the media would yawn and look the other way.

Our fake news media’s only job is to paint Trump’s movement to be “domestic terrorists” who must be walled off from everything.