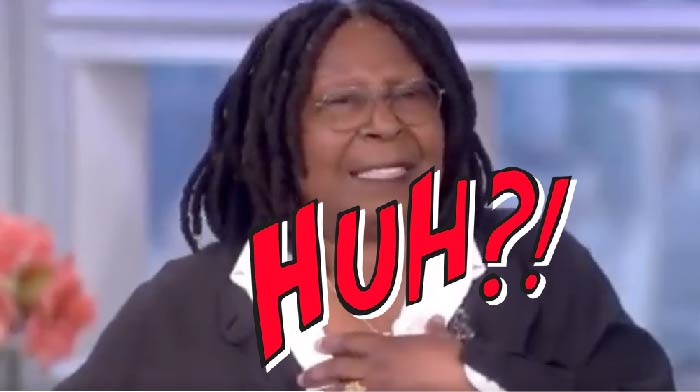 Liberals are complete and total idiots.

They’re all over the map, and the crazy radical nonsense they’ve been peddling is piling up and confusing their messaging.

For a while there, they couldn’t even define what a woman is…apparently, only biologists can do that.

However, now that they’re all foaming at the mouth and upset over the SCOTUS Roe v Wade leak, “women” are apparently back in fashion.

They all know the meaning, and definition, and suddenly a “woman’s body” is a temple again.

And the hysterics over this leak from SCOTUS is bizarre, especially when you realize that back in the 80s, Joe Biden voted to return the abortion issue back to the states… that’s the exact same thing that would happen now. Sadly, overturning Roe v Wade doesn’t end abortion, but by the sounds of it, I think most liberals think it does.

Just look at how off the rails Whoopi Goldberg is on the topic.

Whoopi, who looks to be WELL PAST her child-bearing years, is now claiming there are three people who will decide if she has an abortion or not: Her, the doctor, and her child.

Whoopi on who makes the decision to have an abortion: “My doctor, myself and my child!” pic.twitter.com/YaascCCDnb

Gee, I think the child will always vote “no” on that one, Whoopi.

As a woman, I can tell you I find it really gross that women have embraced abortion to where it’s now an “identity” and a celebration for them.

It’s so disturbing, that this is actually what flipped me from being a “pro-choice” person way back in the day…

Back in my younger years, when I was socially “liberal,” I saw how “abortion” was becoming a battle cry for women, and almost a badge of honor, and it sickened me so badly, that I became very pro-life.

And now, all these years later, it’s gotten so much worse and way more disturbing.

Whoopi’s creepy comment is a perfect example of that.