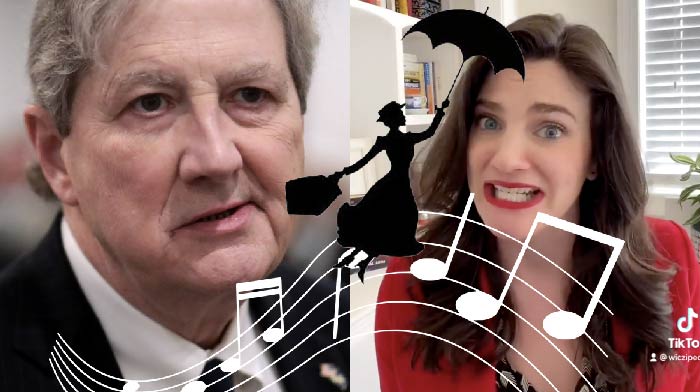 Biden’s “Ministry of Truth” is hitting a lot of bumps in the road lately.

The latest involves the half-baked kook they’ve put in charge of this dystopian communist department.

Her name is Nina Jankowicz, and she’s a wacky, show-tune-singing-Harry-Potter-obsessed immature weirdo… and Senator Kennedy has some questions…

Here she is singing like some deranged Mary Poppins about disinformation.

#USA This is Nina Jankowicz, picked to head the Biden Admin’s Disinformation Governance Board.
In this strange TikTok video from last yr, she warns the public on misinformation, but ends up sounding more like Scary Poppins instead of Mary Poppins 😬 pic.twitter.com/QuS6YG0IDx

And here she is falling for yet another hoax — the Whitmer FBI kidnapping.

Her #1 example was Gretchen Witmer getting kidnapped

Which turned out to be an FBI setup pic.twitter.com/XMnVbkEPt0

This lady is a real weirdo.

And let’s not forget about her “sexy” Harry Potter cover band called the “Moaning Myrtles.”

Is this woman okay? Seriously, is she?

Aside from Nina Jankowicz coming off like an emotionally off-balance immature kook who would rather be singing show tunes, she’s also clearly a very partisan political person, and someone like that has no business supposedly “searching out disinformation.” She obviously has a radical political agenda.

And Homeland Security would have realized this, had they spent 5 minutes vetting her.

But did they do that?

That’s what Senator Kennedy discovered during a 22-second exchange with Secretary Mayorkas.

So, let me get this straight… The “Ministry of Truth,” didn’t actually go online and look for any “truth” about the person who will oversee this entire department?

And the “Ministry of Truth” also had to be told by the public what a complete and total kook their new leader is?

Did I get that right?

What a complete and total joke this entire Biden admin is.