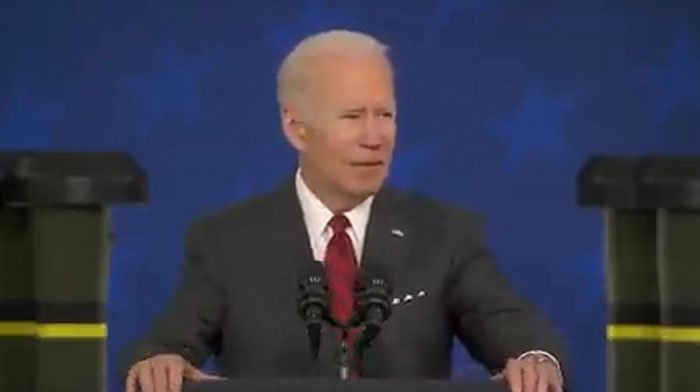 It’s another day folks, and of course, we have another Biden blunder.

During a recent speech, Biden was yet again slurring his words and stated that before “Russia” was attacked, the U.S. made sure that “Russia” had “javelins and other weapons,” so that way Ukraine would be ready for “whatever happened.”

What in the heck is this bumbling buffoon talking about?

Does he even understand the difference between these two countries? And which one we’re sending aid to?

That’s what many people are wondering right now… does Joe even know the difference between Russia and Ukraine?

“Before Russia attacked, we made sure Russia had javelins and other weapons…so Ukraine was ready for whatever happened…”

Has no idea which side he’s sending $33 billion to

Is in charge of the nuclear football

Of course, this isn’t the first time Biden has confused Russia for well… Russia.

In the clip below he actually said “how do we get to the point where Putin decides he’s just going to invade Russia?”

UM, PUTIN IS THE LEADER OF RUSSIA, JOE…

Honestly, how can people continue to defend this guy?

Well, the people responding to this video certainly aren’t and they put Joe through the shredder for this slip-up.

“To be fair, he’s as sharp as the people that voted for him.”

“Right. Because by we he means Him/China made sure Russia had our weapons from Afghanistan to attack”

Biden is an absolute clown show and every day it seems to get worse.

When are they going to put this man and America out of his misery?