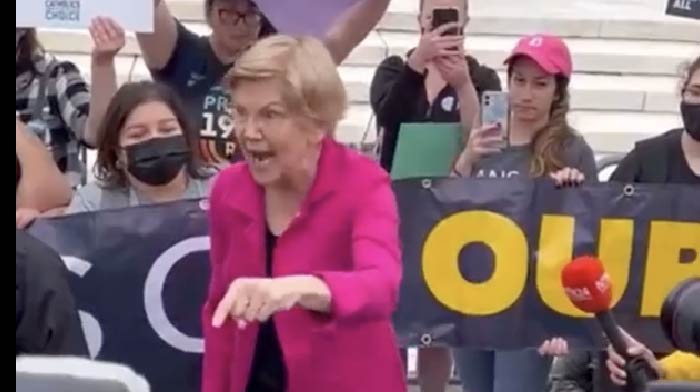 The left is going bat-sh*t crazy over the possibility that Roe v Wade is going to be overturned.

Now, sadly, that doesn’t mean that abortion would end.

All it means is that abortions would be handled at the state level. This is actually something Joe Biden voted for back in 1981, but today, in the crazed world of the radical liberal, it’s all about irrational emotional outbursts and performance theatre.

And speaking of performance theatre, that’s exactly what Liz Warren was doing on the steps of the Supreme Court.

She’s doing whatever she can to get the Dem base reengaged and fired up.

Liz knows this SCOTUS leak or any future ruling wouldn’t “end abortion.” But she’s pretending that’s the case, so that wayward, depressed, and disillusioned Dem voters will have something other than the failures and blunders of Joe Biden to focus on.

So, Liz showed up at SCOTUS yesterday and acted like a damn crazed banshee.

There’s video out there of her acting like this for nearly 2 minutes, but I thought it was more merciful to show you the 6-second version.

“She lied about being a Native American until she got caught a few years ago…maybe she should be outraged over that?”

“This looks and feels so fake and rehearsed.”

“The key to getting by without detection as a sociopath is when people show strong emotion, match them. That way people think you’re one of them while you ream their colon with your fist.”

“She’s mad enough to scalp someone”

“Has anyone tried offering Liz a Peace Pipe?”

“When they take away your #adrenachrome“

“Looks like something off an Iron Maiden album cover”

“Screaming at people is always a good look LOL”

“I think this is why the words “panic” and “scared” have come into the conversation:”

“Watching this on mute makes me think her head will literally explode.”

The left thinks they’ll be able to gin up enough fear and outrage to help stave off the Red Wave coming in November.

I think they might have some success, but I need to first see how this plays out and if it catches on… I have my doubts that they’ll be able to start a whole “movement,” that will inspire that same “Resist” mentality they had when Trump was in office.