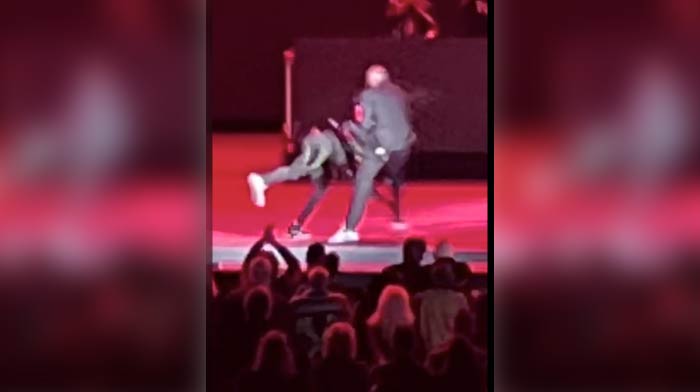 Comedian Dave Chappell was attacked on stage in Hollywood.

Deadline reported that social media exploded last tonight with posts from attendees at Dave Chappelle’s Hollywood Bowl Show, which is part of the “Netflix Is A Joke Festival.”

Apparently, Chappelle was rushed by someone while onstage. Attendees’ phones were confiscated at the gate, so video and even photos are very sparse, but one video posted seemed to show the man smashing into someone holding a microphone, possibly Chappelle.

Los Angeles police confirmed to ABC7 that they responded to a call at the Bowl around 10:45 p.m. They indicated that a man was taken into custody.

He was reportedly armed with a gun and a knife.

In one posted clip, apparently after the incident, Chappelle is heard to quip, “It was a trans man,” a reference to his own transphobic comments in his Netflix special The Closer and the uproar, protests and anger that ensued.

The attacker was later filmed looking as if his arm/hand was injured pretty badly.

Man That Attacked Dave Chappelle At His Show At Hollywood Bowl Has Hands Broken and Dislocated pic.twitter.com/ZvPgjdV5gz

After the attack, Dave addressed the crowd:

Dave Chappelle after A Town stomping whoever attacked him pic.twitter.com/qr1z0xBoJ8

Wow, this could have been a lot worse. Thank God he’s okay.

What’s with all this violence against comedians? Did Will Smith open a can of worms, or what?