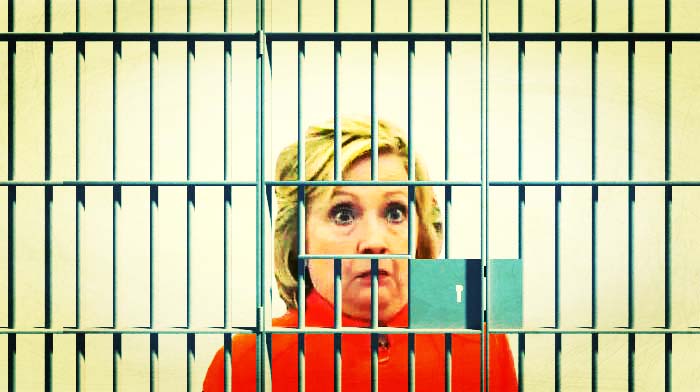 The deeper the Durham investigation gets, the more evidence we see of Hillary’s involvement.

At some point, will her back be so far up against a wall, that she won’t be able to wiggle free?

One can hope…but it seems unlikely that someone like Hillary, who’s so powerful, will fall.

However, if Obama was a part of this (and most assume he was), Hillary could be the “big fish” who they sacrifice… because she’s a has-been, politically speaking, and can easily be put out to pasture… and some in her own party might want her there.

But as it stands now, this new batch of emails brings Durham and his investigation even closer to Hillary, and thanks to the fine folks at The Federalist, we’ve got all the juicy details.

Newly published internal emails reveal that before Fusion GPS hired Steele on behalf of the Clinton campaign to dig up dirt on Donald Trump, the opposition-research firm began peddling several of the same Russia collusion lies that the former MI6 agent would later detail in the Steele dossier. This fact highlights a significant aspect of the Spygate scandal that deserves further focus and condemnation: Democrats’ outrageous exploitation of intelligence credentials and connections to launder scurrilous accusations against a political enemy.

Since early 2018, when the then-Chair of the House Intelligence Committee Devin Nunes exposed in a four-page memorandum evidence that the Department of Justice (DOJ) and the Federal Bureau of Investigation (FBI) had abused the Foreign Intelligence Surveillance Act during the 2016 presidential election cycle, Americans open to reality have been slowly learning of the breadth of the Spygate scandal.

Attention during this time rightly focused first on FISA abuse and the FBI’s use of unverified “intel” to obtain a court order to surveil former Trump campaign advisor Carter Page. As the scandal continued to unravel, the categories of impropriety multiplied, from deep-staters illegally leaking to the media to build the collusion narrative and later to force the appointment of a special counsel, to the selection of the “right people” in the form of rabid partisans to staff the Crossfire Hurricane team.

Another underlying aspect of the scandal only became clear recently with the prosecution of former Clinton campaign attorney Michael Sussmann. Proceedings in Special Counsel John Durham’s false statement criminal case against Sussmann reveal Democrats paid credentialed individuals connected to U.S. intelligence agencies to pass, to both the press and the government, invented evidence of Trump colluding with Russia.

Sussmann, who previously worked for the DOJ, represents one such connected individual whose credentials served to hide the Clinton campaign’s responsibility for creating the Russia-collusion disinformation. Over the last several months, filings in the special counsel’s criminal case against Sussmann have exposed how he played his relationships with FBI and CIA agents to score meetings to pass on data and “white papers” related to the Alfa Bank and Yota phone Russia hoaxes, while hiding their origins.

Now, a batch of emails between Fusion GPS and journalists made public earlier this week in the Sussmann case after the special counsel’s office inadvertently filed them on the public docket suggest Steele was paid for the same reason: his credentials and connections would hide the political nature of the hit.

Those emails reveal that the month before Fusion GPS hired Steele, it had begun spinning the tale that the Trump campaign-connected Carter Page served Russian interests. In mid-May 2016, Fusion GPS’s Jake Berkowitz emailed Slate reporter Franklin Foer about Page. The note, which includes several links with prefatory sentences about Page, reads as a collaborative effort to investigate the Trump advisor.

Peter Fritsch, the co-founder of Fusion GPS, also joined in the email thread. It continued a few days later, with Berkowitz sharing with Fritsch and Foer his latest “research” on Page. That email included a couple of names of “former partners” of Page and a link to a Medium.com article critical of Page. The Medium article also attacked Trump’s then-volunteer campaign advisor George Papadopoulos, whom the FBI would later claim prompted the launching of Crossfire Hurricane when Papadopoulos supposedly bragged that the Russians had dirt on Hillary.

The Fusion GPS researchers continued to share the results of their probe into Page with Foer. Berkowitz on May 19, 2016 told his Fusion GPS boss and the reporter that “some Merrill bond issuances during Page’s tenure” at the investment banking firm of Merrill Lynch involved some “interesting characters,” including Alfa Bank and its founders. To that email, Foer responded that he is “going to do some work on Rick Burt,” whom he bets “does some work for the Russians.” Foer would then claim in a follow-up email that Burt was on the Alfa Bank board.

Foer incorporated the early research he exchanged with Fusion GPS in his Slate piece, “Vladimir Putin has a Plan for Destroying the West—and It Looks a Lot Like Donald Trump,” which cast Page, Papadopoulos, and the Alfa-Bank-connected Burt as Russian-compromised associates of Trump. Foer was also the “journalist” who ran the Alfa Bank tale at Slate just two weeks before the presidential election. Emails exchanged in late June between Fritsch and Foer also show Fusion GPS focusing on Sergei Millian, with Fritsch declaring that Millian is “clearly kgb.”

Fusion GPS continued to exchange emails over the next three months with Foer and other Democrat scribes, such as the Washington Post’s Tom Hamburger and Mark Hosenball from Reuters. Millian was a subject of a July 24, 2016 email sent by Fusion GPS’s other founder, Glenn Simpson, to Hamburger. In that late-July email, Simpson provided the Post’s “journalist” three email addresses for Millian, suggesting a push by Fusion GPS to have reporters focus on Millian as part of the Russia-collusion hoax.

These emails prove significant much beyond exposing the symbiotic relationship that existed between the Clinton-funded Fusion GPS and the unpaid propagandists in the press. That’s because the timing and targets of the communications indicate Democrats paid for Steele to stamp their opposition research with an MI6 imprimatur.

This piece from The Federalist was great.

They always do such good, in-depth work.

I’d encourage you to read all of it here.