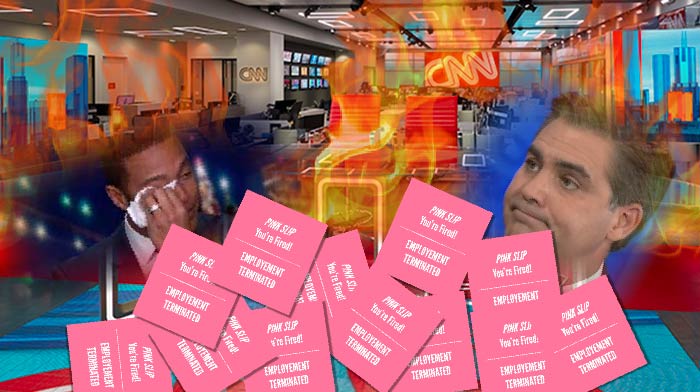 CNN+ ended their run 2 days early. Their last day was supposed to be on April 30th, but they closed up shop on the 28th.

It was a massive and embarrassing failure.

Why in God’s name would anyone PAY for CNN, when they’re not even watching it for “free”? That entire business model made no sense to anyone, outside of the NYC and DC elitist bubble.

Because the reality is CNN is a joke.

They tossed their remaining shred of professionalism in the trash bin the moment Trump splashed on the political scene, and it’s been downhill ever since.

And the kicker in all of this is that CNN acts just like the Biden admin… completely and utterly clueless about what’s really going on, and no understanding whatsoever of why the American people dislike them so much.

MORE NEWS: Another Durham Update: New Round Of Emails Surface Pushing Hillary Closer to The Edge

Well, looks like the folks at CNN are about to get a reality check.

Word on the street is that the new owners will make some huge cuts to CNN’s staff next week.

The first of many bombs to drop, as Discovery tries to bring CNN back to its “glory days” when it actually just reported the news and wasn’t a propaganda arm for the globalist regime.

Here’s what Jon Nicosia, an editor at Washington Examiner is saying: “SOURCE(S): “Layoffs coming to @CNN
next week. Lots in PR/Communications and staffers. Show staffs are being cut by 25%”

SOURCE(S): “Layoffs coming to @CNN next week. Lots in PR/Communications and staffers. Show staffs are being cut by 25%”

“CNN fake news should be closed down permanently.”

“I hope Acosta tops this list at CNN. Will pop Champagne when that happens.”

“Trump exposed CNN for the liars that they are. No one watches it. I hope they go bankrupt.”

“Jeepers, first it was CNN+ and now CNN-“

“Brian Stelter can apply to be Brand Ambassador for Idaho Potatoes.”

“Maybe they can learn to install solar panels.”

“Guess even Democrats are getting tired of fake news”

“Lesson: Lying is not a business model.”

“Learn to code. That’s what these people told the Keystone Pipeline workers, right?”

“Let’s hope they get rid of the people who are responsible for all the fake news and division in this country, not the poor lighting guy or something”

“An industry that not only outgrew its market but showed disdain for its customers meets a recession.”

“the people who run CNN hate regular Americans, I will not shed one tear for them losing their job. not one”

I don’t like to see people lose their job, but I too will not shed a tear for these evil, divisive fake news peddlers who have sewn so much discourse, lies, and hate in this country.

CNN is a CIA propaganda machine, and it needs to be dismantled and either destroyed completely or rebuilt from the ground up with all new parts.

They truly are the enemy of decent Americans, and I am happy to see them crash and burn.

Karma, justice, righteousness…call it what you want, it’s a victory for the country.