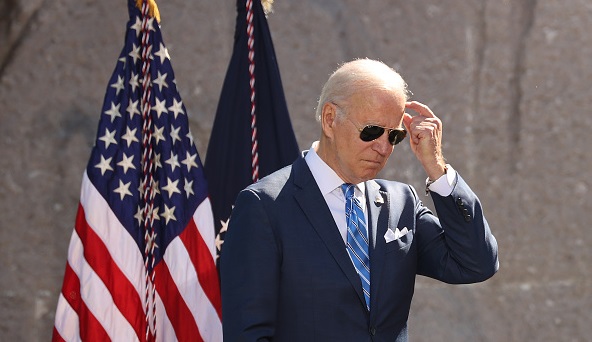 President Biden’s goal to get a federal vaccine mandate in play by Jan. 4 has been quickly blocked after the U.S. Court of Appeals for the Fifth Circuit assessed that the mandate posed “grave statutory and constitutional issues.”

Celebration of the appeals court docket’s determination was spearheaded by Texas Republican Attorney General Ken Paxton and the Lone Star state, becoming a member of 26 different states that have been towards requiring companies of 100 or extra workers to require proof of vaccination for its staff, or subjecting them to weekly testing, per The Hill‘s reporting.

State officers against Biden’s vaccination ruling, which was filed underneath OSHA (Occupational Safety and Health Administration), warned that subjecting companies to those requirements would result in a continuation in labor shortages and could possibly be a loss of life sentence for companies that infringe on the regulation — which might warrant an almost $150,000 high-quality, per infringement.

“Yesterday, I sued the Biden Admin over its unlawful OSHA vax mandate,” Paxton introduced on Saturday. “WE WON. Just this morning, citing “grave statutory and constitutional issues,” the fifth Circuit stayed the mandate. The struggle is just not over and I’ll by no means cease resisting this Admin’s unconstitutional overreach!”

Missouri Attorney General Eric Schmitt joined the celebration following the fifth Circuit’s announcement to remain the mandate — although the battle to maintain the Democrats’ plans on imposing a federal vaccine requirement nonetheless persists.

“Its unlawful mandate will cause injuries and hardship to working families, inflict economic disruption and staffing shortages on the States and private employers, and impose even greater strains on struggling labor markets and supply chains.”

On Friday, nameless workers from Procter & Gamble launched a video warning of dire shortages in good and labor anticipated within the coming months — because of the hundreds of staff which can be anticipated to be lower over not being vaxxed.