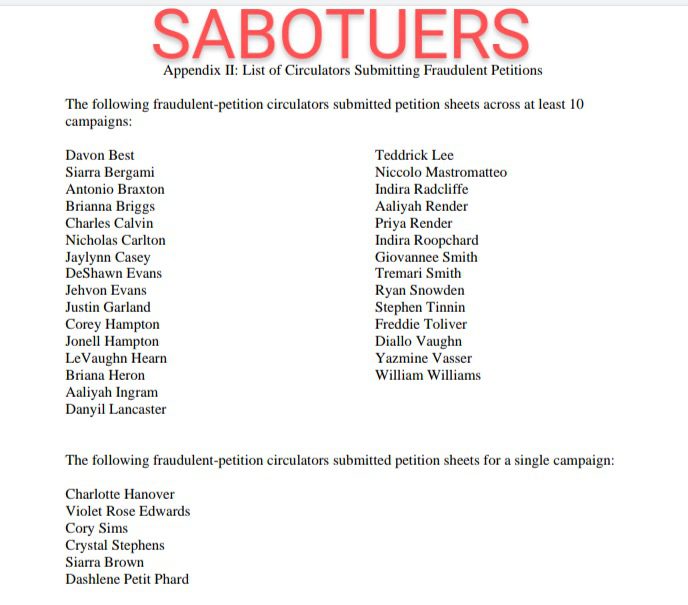 The other three candidates include Michael Markey, MI State Police Captain Michael Brown, and Donna Brandenburg. They were notified by the State of MI Bureau of Elections that thousands of fraudulent signatures had been identified on their nominating petitions, which placed them all in danger of being removed from the primary ballot in August.

The MI Board of Canvassers will make the final decision  on May 26. The board is comprised of two Democrats and two establishment Republicans. 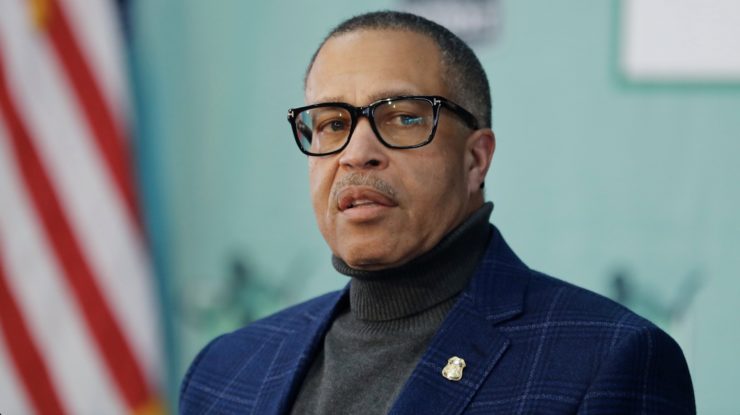 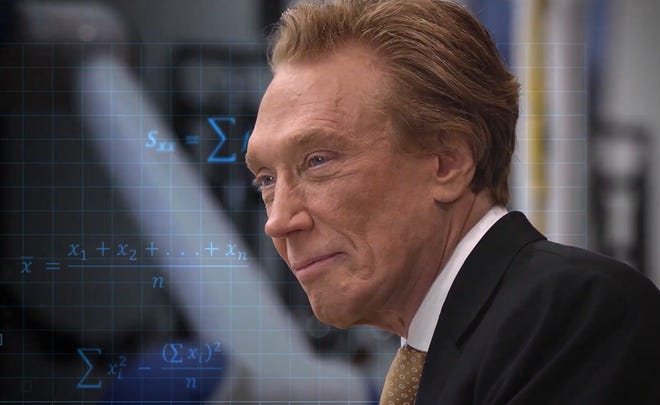 Yesterday, I spoke exclusively with a whistleblower* tied to the petition gathering process in Michigan as I tried to understand better how so many intelligent candidates were caught up in what appears to be a significant signature forgery scheme.

During a lengthy conversation with a Michigan whistleblower who’s been in the signature-gathering business for a long time, she named some of the key figures involved in the unethical and likely illegal practice of gathering forged signatures for candidates paying them in good faith to complete their nominating petitions.

The first name we discussed was First Choice Consulting founder “Shawn Wilmoth.” When I mentioned his name, the whistleblower immediately responded, “Shawn is definitely” behind the scandal. When I asked her to define Wilmoth’s alleged role in the gathering of fraudulent signatures, specifically for the GOP gubernatorial candidates whose campaigns are in jeopardy, she explained: “Shawn owns a company called First Choice Consulting, and he just had too many clients.” In addition to being overwhelmed with too many clients, the whistleblower also blamed a “labor shortage” for some of the unethical practices within the signature-gathering community, citing an “unusually long winter” coupled with a shortage of workers because “so many people are still getting government assistance [COVID payments].” She admitted that it’d become a challenge to get the same amount of required signatures for candidates with fewer workers.

Another source in the business of collecting signatures told me, “If Shawn Wilmot’s behind the [GOP fraudulent signature] scandal, the person who hired him needs to be held accountable.” He explained that Wilmot has two previous voter fraud felony convictions,” and almost everyone in this business who hires him knows what they’re getting into” when they hire him.

In April 2011, Wilmoth was arrested in Michigan and accused of instructing employees to fraudulently sign petition pages. Wilmoth pleaded guilty. A statement of facts entered as part of the plea reveals that Wilmoth hired two ex-cons, who were ineligible to collect petition signatures under state law, and asked them to not only collect signatures but to sign as a witness on dozens of petition sheets filled with signatures they did not collect.

As part of the plea deal, Wilmoth was given two concurrent 5-year sentences, with 4 years and 8 months suspended on the condition of good behavior and repayment of court and extradition costs, and sentenced to 3 years of supervised probation. He was also released from jail after being credited with time served. 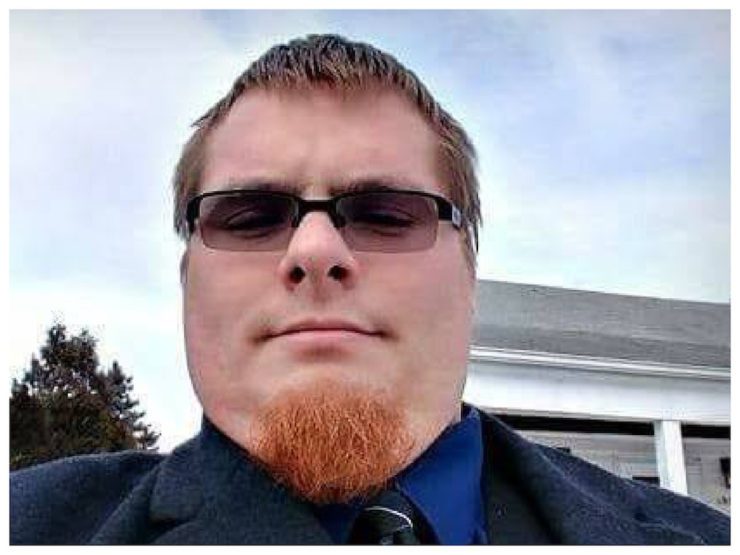 Yob shared his outrage over the decision on Twitter.

The staff of the Democrat Secretary of Staff does not have the right to unilaterally void every single signature obtained by the alleged forgers who victimized five campaigns.

In subsequent tweets, Yob claims the invalidity of one signature on a ballot does not invalidate all signatures and that the burden of proof is on Michigan’s dirty Democrat Secretary of State Jocelyn Benson.

According to MCL 168.544c(6) ‘The invalidity of 1 or more signatures on a petition does not affect the validity of the remainder of the signatures on the petition.’ They have the burden of proof on each and every signature.

Perry Johnson retweeted Yob’s tweet threatening legal action and accusing the board of refusing to count the thousands of legitimate signatures.

According to the MI Bureau of Elections report, 36 petition circulators have been identified as passing along fraudulent signatures to the campaigns of the five GOP gubernatorial candidates, including two of the front-runner candidates, James Craig and Perry Johnson. 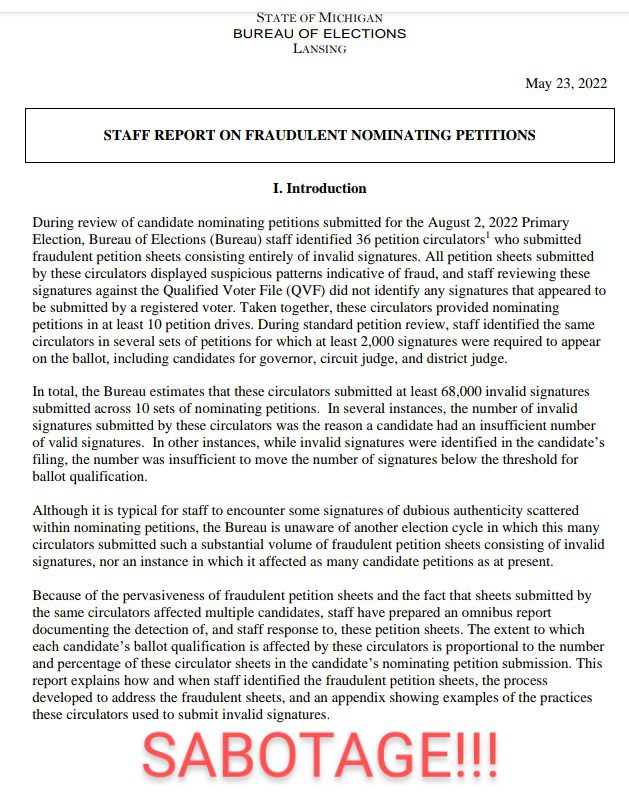 The whistleblower explained how forgery became prevalent in their industry. “A couple of years ago, Mark Jacoby, he’s a big name in the industry—started paying people to do a ‘plebiscite,’ which means it’s a fake petition, it’s not a real. And then people would get signatures; they really wouldn’t get signatures; what they would do, is they would forge all of them. And in our industry, it would open the door for people who are not petitioners to forge stuff—and that’s what we’ve been getting deluged with—with all of these forgeries. Mark Jacoby is the founder of “Let The People Decide.” 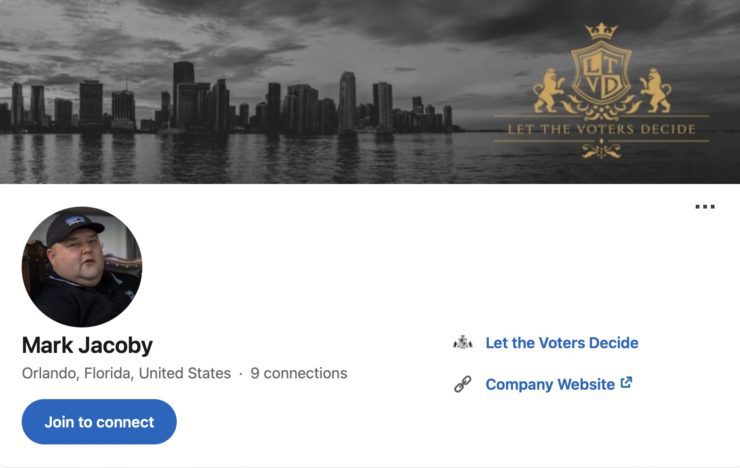 She explained that Mark Jacoby’s “plebiscite” scam is a way to trick people into thinking they’re signing a petition, but it’s not a petition. Petition gatherers would be paid $3-$5 per signature for a fake petition. This practice would trick voters into thinking they signed a petition and prevent them from signing the actual petition when asked.

“So, on top of that, Jacoby’s people came up north from Florida, and they were all staying in a hotel. So they were all in a hotel, and they were doing what we call a ’roundtable.’ Jacoby allegedly fired them, and according to the whistleblower, Shawn hired them to gather signatures for him.”

The whistleblower shared this image of a page of clearly fraudulent signatures recently turned in by s signature gatherer for Michael Markey. 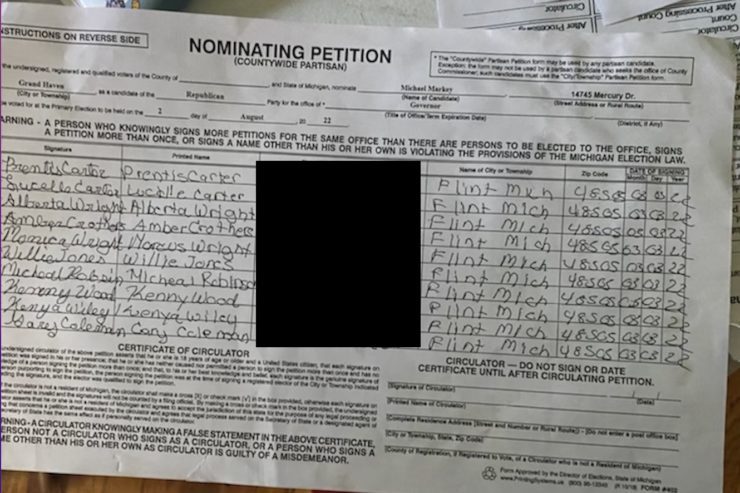 The petition was ultimately rejected, but she blames the “plebiscite” scam for petition gatherers falsely believing that forging signatures on petitions is a legal practice.

In 2008, Jacoby was arrested for an elaborate scheme by CA state investigators and the Ontario Police Department after dozens of voters said they were duped into registering as Republicans by people employed by Jacoby’s company YPM (Young Political Majors). The voters said YPM workers tricked them by saying they were signing a petition to toughen penalties against child molesters.

The firm was paid $7 to $12 for every Californian it registered as a member of the GOP.

Dan Goldfine, an attorney for Jacoby, denied any wrongdoing by his client and called the charges “baseless.” Jacoby was also accused of registering himself to vote twice – in 2006 and 2007 – using the address of a childhood home in Los Angeles where he no longer lived. The Secretary of State’s Office said Jacoby used a CA address to meet a state requirement that signature-gatherers sign a declaration stating that they are either registered to vote in California or are eligible to do so.

She said they also warned Shawn that he shouldn’t have petition carriers going out and getting signatures from multiple candidates simultaneously.  “I know for a fact that they’re taking the very same signatures and sending them into National Petition Management for Tudor Dixon, and they’re coming back and sending them in for Michael Markey, the radio host, and Michael Brown, the State Police guy.” She explained, Shawn “knew they were forgeries, but he kept taking them.” She explained that they were actually hoping he’d go to jail for forgery so they could make an example of him and stop the rampant forgery taking place with petition gatherers.

The whistleblower explained how Shawn would trick people into signing petitions for candidates. “Statewide issues are easier to get people to sign, but getting signatures for candidates is much harder.  It’s really hard to get signatures for candidates; you have to convince them or get them to let down their guard or lie to them. So, what Shawn did is he lured people in by telling them, ‘Hey, sign this for minimum wage, and oh, here’s a candidate.”

“He had a lot of candidates,” she said, adding, “At one point, I think he had five different governors.”  I asked her which gubernatorial candidates Shawn Wilmoth was gathering signatures for? “He had Michael Markey, Michael Brown he started off with but wouldn’t go up past 275 because they ran out of money. He had 4 or 5 thousand with Perry Johnson. He had Donna Brandenburg, he had the whole thing, but he didn’t get all of them.  I guess he had 4 or 5 thousand with Chief Craig because they were getting in trouble because they were worried about not having enough signatures, so they came to Shawn, and he said, ‘Yeah, I can pick that up for you.’” She said Perry’s campaign was desperate to get signatures for him because he entered the race later than the other candidates and needed help. According to the whistleblower, Shawn was paid a stunning $20 per signature for Perry’s petition.

Here is a list of the names of the signature gatherers who are allegedly being charged for providing petitions to the campaigns of the five GOP gubernatorial candidates:

A heartbroken Captain Mike Brown has dropped out of the race, while former Detroit Police Chief Craig and Perry Johnson are vowing to fight the decision to remove their names from the ballot.

Should the candidates be held responsible for the signatures, or should the people in their campaigns who hired and accepted the signatures without checking them be held accountable?

“I do believe this was a well-planned and orchestrated effort to get me off the ballot,” Craig said in an interview with the Free Press.

“I’m being robbed of the opportunity to be on the ballot and let Michigan voters decide who should represent the GOP.”

*We cannot confirm or deny the claims made by the whistleblower. We are simply reporting the statements she made to us about the petition signing process and how fraudulent signatures are gathered, and how voters and candidates are being duped by unethical and even potentially criminal petition gatherers in Michigan.