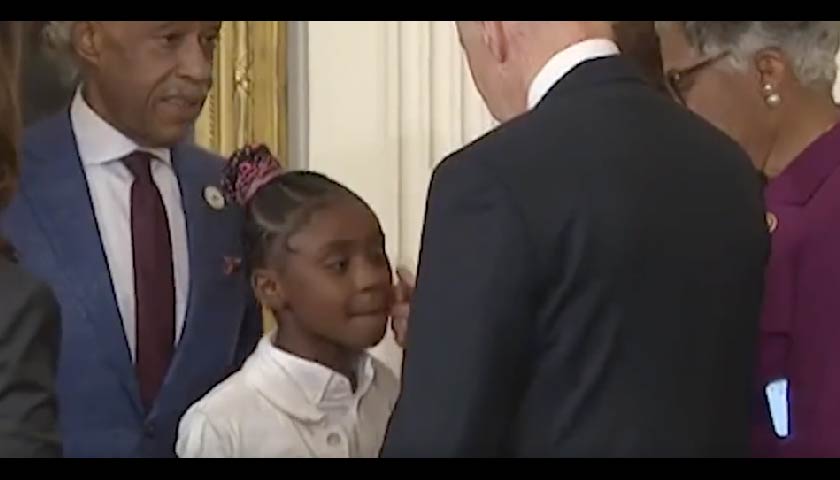 Here’s a public service announcement: If you’re a man, any man, please don’t touch other people’s kids unless their parents give you permission.

If you’re a creepy, shaky old man with a sketchy/perverted past, please don’t touch any kids, ever, no matter what, Joe.

I don’t know why Joe Biden can’t stop himself from getting into the personal space of young kids (mainly girls) and touching them.

He won’t stop doing it, even though it makes Americans feel uncomfortable, so that tells me he CAN’T STOP himself, and that’s a big problem.

And it just happened again.

During today’s executive order signing for police reform, Joe Biden inappropriately and rather intimately caressed a young girl’s face and appeared to touch her side, while she stood there looking really uncomfortable.

You can watch the video below: “What in the world is Joe Biden doing to this little girl?? Video is from today’s executive order for police reform signing at the White House.”

What in the word is Joe Biden doing to this little girl??

Video is from today’s executive order for police reform signing at the White House. pic.twitter.com/hls3xW8KN5

“Well at least he’s not naked and whipping her. Yet.”

“Why do we have to witness Biden acting inappropriately with little girls?”

“Brandon straight creepin on a child”

“This young girl is definitely in an uncomfortable situation by Joe”

“What in the hell are these old men doing? Her actions tell you, she is in an uncomfortable situation.”

“He touched her twice, maybe three times. Once on the side (perhaps) once on her chest (w/pointer finger) and then brushes her cheek with the back side of his fingers. Then Sharpton has to hold her still.”

A room filled with creepy old men pawing a young girl like a slab of meat.

It just doesn’t get grosser than that.