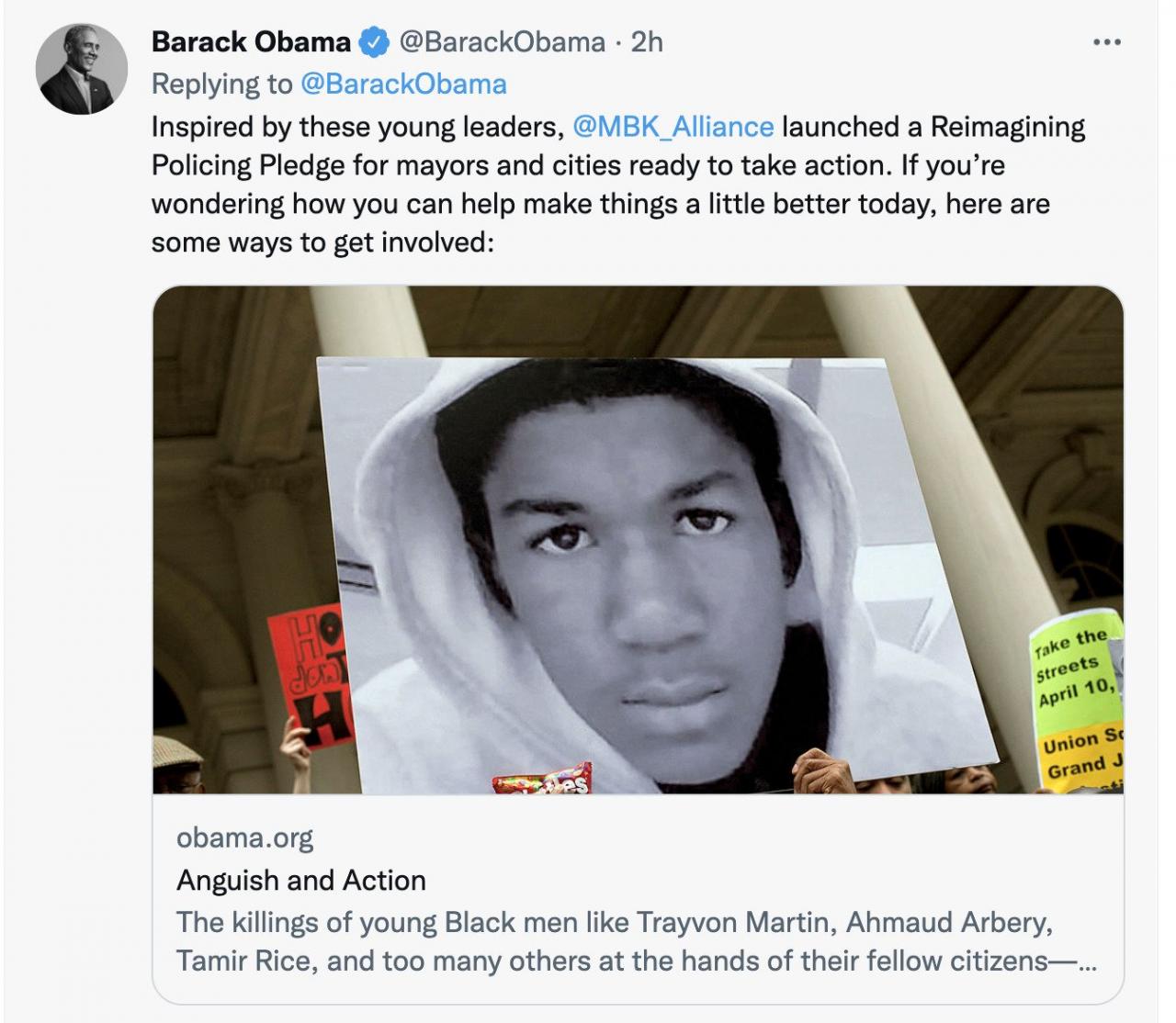 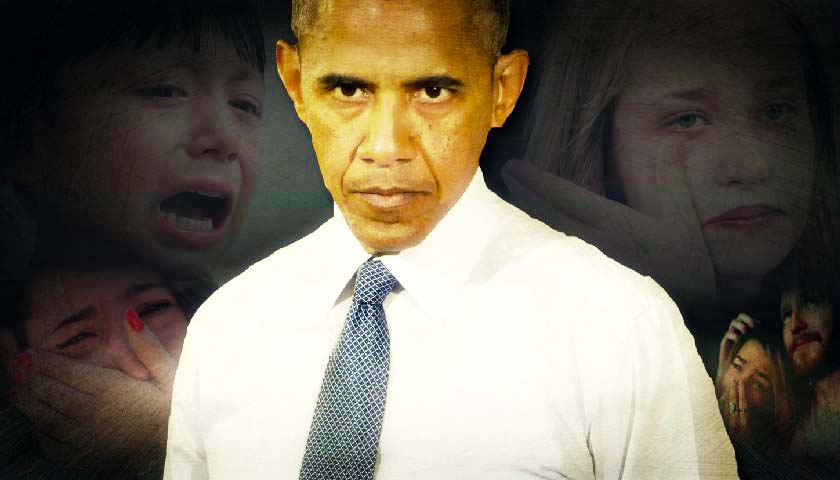 That’s the only thing I can think he’s doing after reading the cold and bizarre message he wrote on Twitter regarding the Texas school shooting.

Actually, I don’t even know if I’d call it a message for the 19 kids who were murdered…

It was more like a bizarre dog whistle to his radical base, to remind them to get frothing mad so they show up at the polls in November.

I don’t know how else to explain it, but I can tell you this much – people were confused and horrified when they read it.

Here’s what Obama said: “As we grieve the children of Uvalde today, we should take time to recognize that two years have passed since the murder of George Floyd under the knee of a police officer. His killing stays with us all to this day, especially those who loved him.”

As we grieve the children of Uvalde today, we should take time to recognize that two years have passed since the murder of George Floyd under the knee of a police officer. His killing stays with us all to this day, especially those who loved him.

But he didn’t stop there…

“In the aftermath of his murder, a new generation of activists rose up to channel their anguish into organized action, launching a movement to raise awareness of systemic racism and the need for criminal justice and police reform.”

“Inspired by these young leaders, @MBK_Alliance launched a Reimagining Policing Pledge for mayors and cities ready to take action. If you’re wondering how you can help make things a little better today, here are some ways to get involved:”

Here are closeups of the tweets: 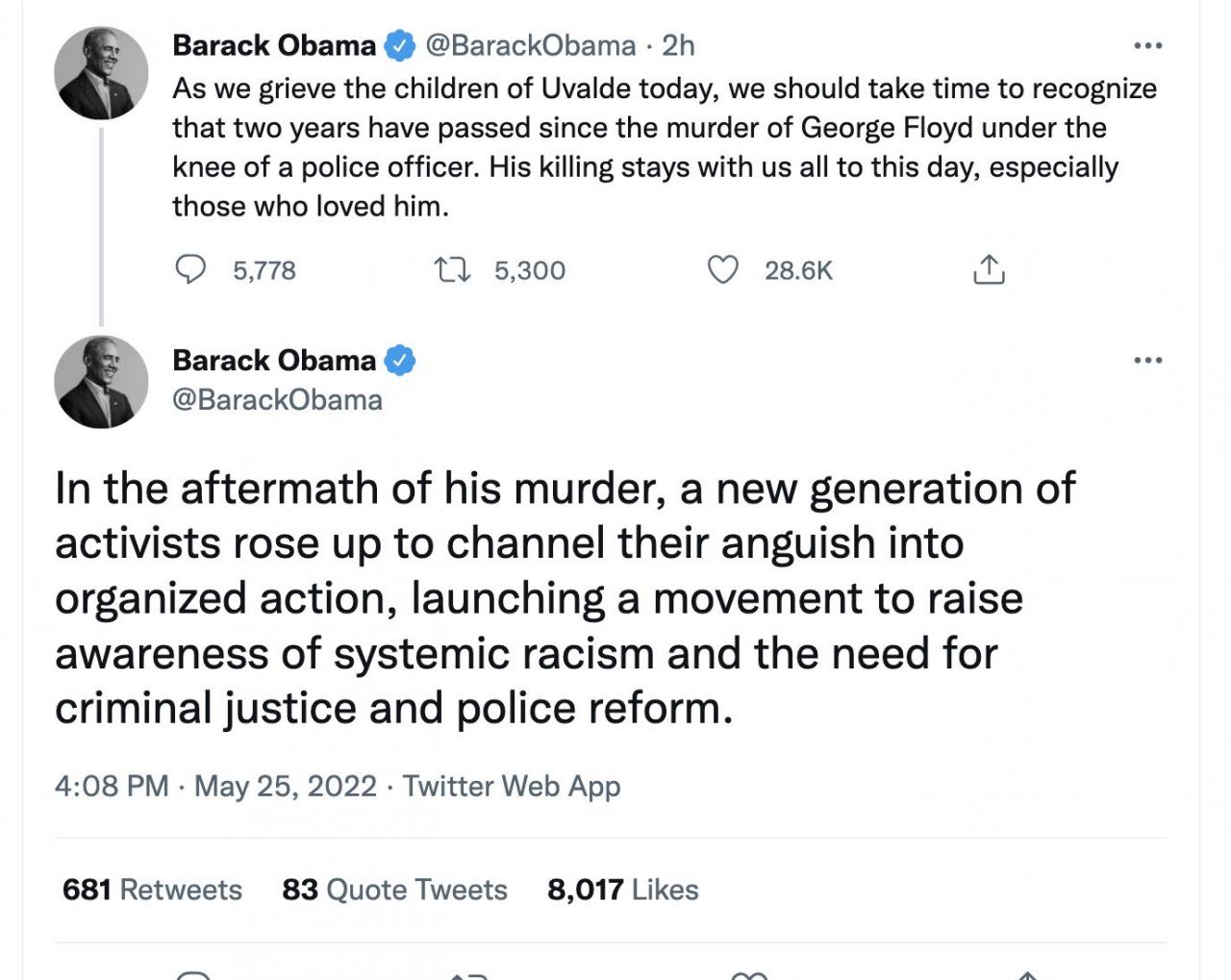 He really is the all-time divider in chief, isn’t he?

You can imagine the pushback Obama got for that tweet. It was massive:

“What the actual f**k is this crazy idiot doing? I am shocked at this”

“how do you even make this about george floyd? my god 19 little kids died, you monster.”

“Am I the only person who thinks this could have waited a day?”

“Seriously, WTH is wrong with this guy? George Floyd? Really?”

“This man is sickening, George Floyd was a criminal who held a gun to a pregnant womans belly. The children of Uvalde were innocent victims, they dont belong in the same tweet. Obama hates you America, always has, always will.”

“Are you really saying George Floyd’s life matters more than the kids that died in Texas?”

“How tone deaf can you get? Unbelievable.”

“I’m a Democrat. It’s fine to support George Floyd and his family, but not today, and not like this.”

“Look what this moron tweeted!! How can anyone be so insensitive??”

“Wow, just wow!! Way to grandstand to your radical followers over the corpses of children. You were an Obamination as president and you clearly are as a human being! “

“I’ve seen a lot of dumb tweets in the past 24 hours… but this might take the cake! Wow, that is disrespect.”

“Obama acting like school in summertime. No class. Only agenda. Sick f**k”

“WTF, there is no COMPARISON to the THUG George Floyd and 19 innocent children along with their 2 teachers. What a POS!!!! This kind of BS from Obama is infuriating.”

“I support Floyd and the cause, but Mr. Obama, this is in very poor taste. Please delete.”

“What sick twisted thing to say, go away war criminal”

“This is serial killer level sh*t”

Talk about trying really hard to remind people to be angry, right?

See, the Dems need their base mad and out in the streets.

It’s the only hope they have of getting them to the polls.

So, they’ll do ANYTHING to make that happen, even using 19 murdered kids as a stepping stone.