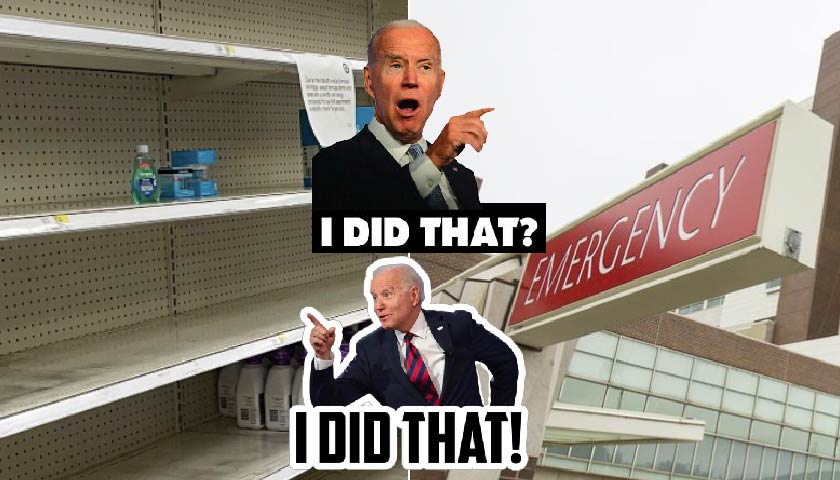 I can’t believe this is happening in the United States of America… malnourished babies are being rushed to the ER because parents can’t find baby formula on the store shelves.

This is Biden’s America… where Ukraine comes first.

We’re hearing Joe Biden was told about this looming baby formula crisis back in February and did nothing to stop it.

As usual, Joe focused on other things, like Zelensky and his Green New Garbage Deal, while this crisis spun out of control.

Now, we’re hearing that babies in Milwaukee are being admitted to the ER for malnourishment.

You hear of stuff like this happening in Venezuela.

You never imagine it’d happen here at home… but here we are.

TMJ4 reported that Children’s Wisconsin says babies have been admitted to its emergency room for malnutrition during the baby formula shortage.

The I-Team asked Children’s how many babies have been admitted and the infants’ health status, and a hospital spokesperson told us in a statement, “Exact numbers on kids who have been hospitalized due to formula substitutions are not available. Kids will frequently present with malnutrition or failure to thrive for a number of reasons–including a lack of access to formula. But we are seeing more kids where inappropriate substitutions of formula is a factor in their hospitalization.”

“It is true that we’ve seen babies hospitalized because they don’t have enough formula, or they’ve made homemade formula that aren’t meeting their nutrient needs, and they’re experiencing things like malnutrition,” said Jennifer Crouse, Clinical Nutrition Manager with Children’s Wisconsin. “This is something that’s harming kids because we don’t have enough supply on the market.”

This is horrific and unforgivable.

What Biden has done to this country and the American people is 100 percent unforgivable.

I guarantee that Pete Buttigieg’s twins have all the formula they need and will NOT be hospitalized for malnourishment.