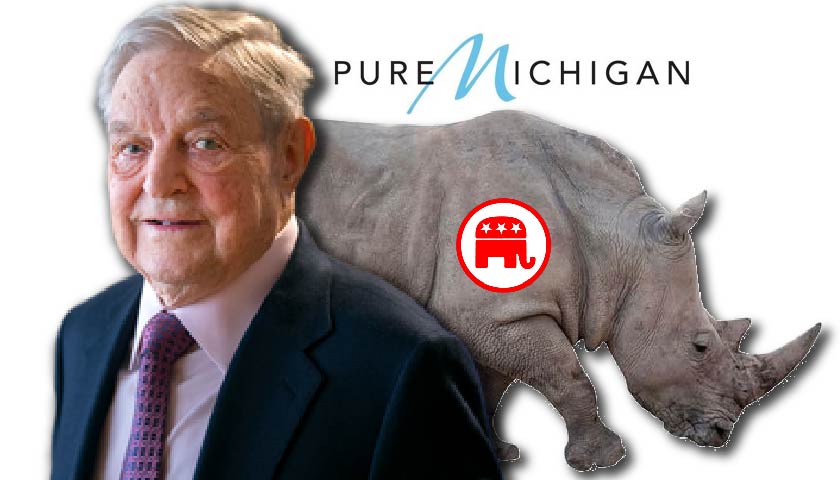 If you want to know how deep, disgusting, and murky the swamp is, keep reading…

I am about to blow your mind and boil your blood with this doozy of a story out of Michigan.

So, here’s the skinny: a Republican Senator by the name of Roy Blunt, who is from Missouri, has a son by the name of Andy. And Andy is a “Republican operative” who is working closely with a dark money “Soros-linked” group to tank any hope of “voter ID” laws in Michigan… and the really bad news is they’re about to win.

This is how dirty, slimy, and putrid the so-called “Republican Party” truly is.

The firm, which Blunt first registered in Delaware before expanding it to 10 other states, functions as a stealthy subsidiary to Blunt’s public-facing canvassing company, HBS+. The setup has allowed Blunt and his partners, fellow Republican operatives Gregg Hartley and Meghan Cox, to rake in hundreds of thousands of dollars from deep-pocketed liberals without alienating their conservative clients.

The revelation shows just how far liberal operatives are willing to go to tank the ongoing voter ID expansion effort in the Great Lakes State. In at least one case, for example, the Sixteen Thirty Fund used its Republican allies at Groundgame to pay canvassers tens of thousands of dollars not to work on the issue.

That ploy saw Groundgame reach a November agreement with a Michigan petition gatherer that paid him $50,000 not to work on any “election reform” issue. Cox personally signed the contract, which the petition gatherer called a “scheme to pay off circulators not to engage” in the voter ID initiative. Just one day before Cox sealed the deal, Groundgame received a $56,000 payment from an equally shadowy political action committee, Protect MI Vote, that the Sixteen Thirty Fund bankrolls to fight voter ID in Michigan. According to campaign finance disclosures, that payment went to Groundgame through a Jefferson City, Mo., address registered to Blunt’s consulting firm, Husch Blackwell Strategies.

Blunt, Hartley, and Cox did not return multiple requests for comment. All three have professional ties to Blunt’s father. Blunt managed his father’s Senate campaigns in both 2010 and 2016, while Hartley from 1997 to 2003 served as then-congressman Blunt’s chief of staff. Cox, meanwhile, has directed field efforts for the Republican senator, her online bio states.

The three operatives teamed up to launch HBS+ on May 6, 2021. According to a press release announcing the move, which lists Cox as CEO, the firm exists to “create ballot access strategies and manage influence campaigns.”

Just 13 days after the launch, business records show, Blunt, Hartley, and Cox registered Groundgame Political Solutions, LLC—an HBS+ subsidiary that the trio did not publicize—in Delaware. The operatives used a corporate compliance company to do so, which allowed them to keep their names off of the filing and distance themselves from Groundgame.

Now, if the Republican efforts are successful, it would require voters in Michigan to use IDs and/or social security numbers to submit absentee ballots.

The campaign needs to get roughly 340,000 signatures to approve the proposal and bypass a Whitmer veto.

But thanks to “Groundgame” that likely will not happen. The Detroit News says candidates are now struggling to collect signatures thanks to a canvasser shortage, an issue that Groundgame’s scheme to pay petitioners not to work likely exacerbated.