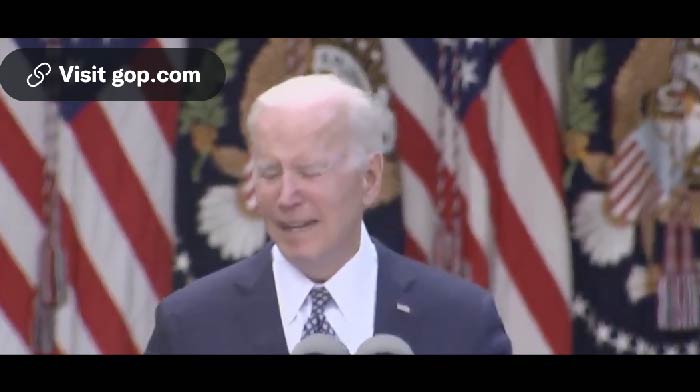 They must’ve pumped up Joe Biden with a lot of juice to get him through that Buffalo, New York speech yesterday.

He was probably hooked up to an IV for 48 hours, just to get enough meds into his wrinkly old veins to keep him looking semi-alert.

Well, whatever they gave him has clearly worn off and Joe now needs to have his batteries recharged.

Biden was tripping all over his tongue during recent comments he made. But I noticed something interesting that’s been happening lately.

Now, when Joe screws up and has one of his “cognitive spells,” he simply fluffs it off with a self-deprecating joke, and the audience awkwardly laughs.

The entire “Alzheimer’s moment” is just laughed off, and brushed aside as if it’s some normal, everyday occurrence.

It’s not, but Joe’s Handlers want you to think it is.

Biden is running out of batteries again.

“They just laugh like it’s a regular good thing”

“His batteries were made in Beijing!”

“Will you all be laughing when the VP has to step up and be the new fake president?”

“This is torture He needs prayers”

“Can someone pull a Bruce Almighty on his teleprompter, please? Be the hero we are all looking for.”

“He is always heavily medicated. Elder abuse on TV”

“I’ve noticed he has started trying to deflect from the cognitive decline by using self-deprecating humor. Sad to see, but he shouldn’t be president in that condition.”

“I’m told they are using Adderall to keep him going.”

“So, now Joe’s dementia is “FUNNY” huh? We’re all supposed to laugh and move on?”

We went from it’s a “childhood stutter,” to “laughing it off” in record time, didn’t we?