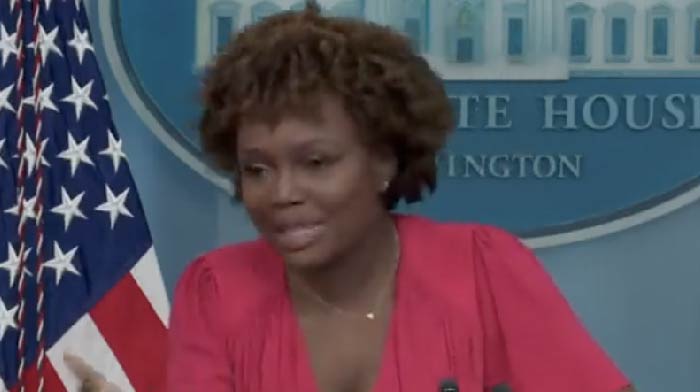 It was not a good day for Biden’s new conspiracy theorist press secretary Karine Jean-Pierre.

She ran into a wall called Peter Doocy, and she got pretty beat up, to be honest.

They want gas to stop climbing — it’s about to hit 5 bucks a gallon soon, and they want to buy a used car and a house without selling off a limb or two.

But the Biden admin has no answers so they don’t want to talk about inflation and baby formula, so instead, they’re trying to make people think they’re fighting for the “working class” guy by doing this “fair share taxes/eat the rich” nonsense.

First off, everyone in the United States is over-taxed… and some rich guy paying more taxes on April 15th will have NOTHING to do with working-class putting gas in their car or parents finding baby formula on the shelves.

And that’s exactly what Peter Doocy cornered Karine on, and my goodness, she didn’t handle it well… at all.

Well, I think it’s fair to say that Karine is no Jen Psaki; one of the best BS’ers and liars in the swamp.

I have a feeling ol’ Karine is going to have a lot of trouble dealing with Peter… should be fun. 🍿