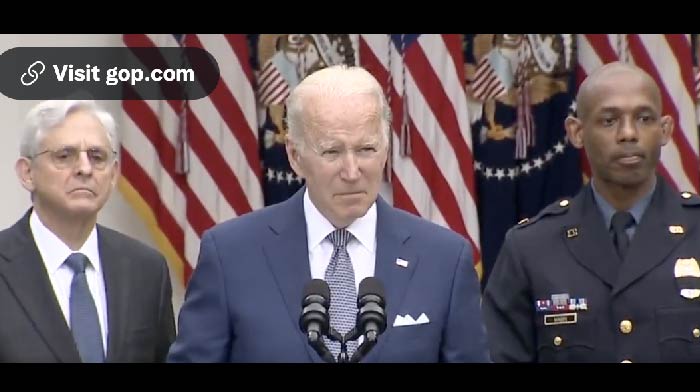 Remember when Joe Biden said he would never blame anyone and would always take responsibility?

Well, we all remember when he said that, but obviously he doesn’t, because he blames everyone but himself, and takes zero responsibility.

Right now we’ve got a major crisis happening in the US. We’ve basically run out of baby formula, and Joe Biden is too busy trying to send billions to Ukraine, to worry about anything happening here at home.

Five long months ago there was a recall of baby formula. Joe’s FDA shut down a MAJOR plant without even attempting to work through the issues.

Honestly, we don’t even know if there were serious issues or if it was something that could’ve been quickly fixed.

They handled badly the whole thing from the jump.

Now, liberals are trying to blame THAT for where we are now.

MORE NEWS: [VIDEO] Melania is BACK and She Just Took a Flamethrower to Sleepy Joe

This is Joe’s fault, just like all the bare shelves and the soaring gas prices, and the insane inflation. He’s the s0-called “president” so he owns all of it. Every last bit.

But Biden refuses to take the shortage seriously. He discussed the shortage the other day but refused to allow the press to cover it.

And now, when asked about how he’s handled this crisis, Biden snapped and said, the only way he could have done a better job, was if he were a “mind reader.”

What an a-hole this cranky old jerk is.

BIDEN: “If we had been better mind readers, I guess we could’ve” taken action to address the baby formula crisis sooner.

“You are again proving how disconnected you are and how Americans are not first with you! This baby formula issue has been going on for months! Why didn’t you do something???”

“Now the criteria to be president is “ you have to be a mind reader.”

“BS. Everyone saw this coming. You just chose to not care.”

“The FDA was warned months in advance that there was an issue at the Abbott facility. And did nothing.”

“Still not taking responsibility @POTUS. It happened on your watch so you own it.”

“The buck stops with anyone but him.”

“I thought they’ve been on it for months?”

“Mind readers?? I’d settle for the ability to read 1st and second-grade material.”

“Your FDA shut down a major producer versus working through the quality issues, WTF”

“It don’t take a GD mind reader to know if you ship pallets and pallet to the border for economic moochers, we’d run out! Idiot.”

“A leader who cannot foresee issues cannot prevent them.”

“Your administration shut down the largest producer of baby formula in America based on speculation. You didn’t have to read anyone’s mind.”

Biden and his inept admin are NOT focused on domestic issues unless it involves “green energy.”

Our country is literally falling apart, and all Dems and RINOs can do is worship Ukraine and send them more of our hard-earned money.