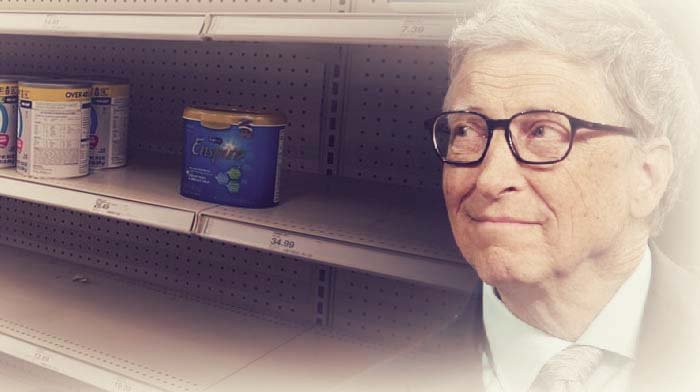 As you likely know, right now we’re in the midst of a baby formula shortage.

American parents are scared stiff, as grocery store shelves go barer by the minute, and they’re left driving around for hours looking for baby formula to feed their children.

To make matters worse, we’re told that Biden is keeping the shelves at the border stocked with baby formula for illegal aliens. This shouldn’t shock anyone, Biden and the Dems are “America Last,” and only care about cultivating new voters.

So, the baby formula situation is bad right now, and while I was looking for more info on the shortages I happened upon something that I thought you might find interesting.

Did you know that last year, Bill Gates invested A LOT of money in a new startup company that wants to make “lab-grown” breastmilk?

Yeah, what a coinkydink, right?

Green Queen reported that Biomilq, the female-founded biotech developing lab-grown breastmilk, has received backing from Bill Gates’ Breakthrough Energy Ventures in its latest Series A financing. The round, co-led by Breakthrough and Danish investors Novo Holdings, will help Biomilq accelerate its plan to launch cell-cultured human breastmilk and disrupt the multibillion dollar infant milk formula industry within the next four years.

Biomilq has announced on Wednesday (October 20) the closing of its Series A funding round with $21 million. The North Carolina-based biotech attracted funding from existing investor Breakthrough Energy Ventures, the sustainable VC firm founded by Bill Gates, and Danish life science investor Novo Holdings.

Biomilq says that proceeds from the round will accelerate its plans to bring its flagship product, cell-cultured human breast milk, to market. Earlier this year, the company announced that it had successfully farmed human breast milk outside the body.

The biotech uses proprietary technology, based on cellular agriculture, to create an alternative feeding option for infants—one that is not only more sustainable by virtue of eliminating the need to rely on conventional dairy milk, but also provides the optimal nutrition in real human breastmilk.

Rather than producing just a “handful of components” within human milk, Biomilq is focused on creating a “whole milk product that maintains the integrity of it’s incredible evolutionary origin.” That includes the anti-inflammatory polyunsaturated fatty acids (PUFAs) known to play a role in promoting healthy development in babies.

It’s weird how Bill is always around when a catastrophe breaks out.

He owns massive amounts of farms and suddenly a food shortage pops up and he’s growing lab meat.

He works on vaccines, and a “pandemic” attacks the earth.

Baby formal shortages hit the US, and Bill’s the guy who invested millions in lab breastmilk.