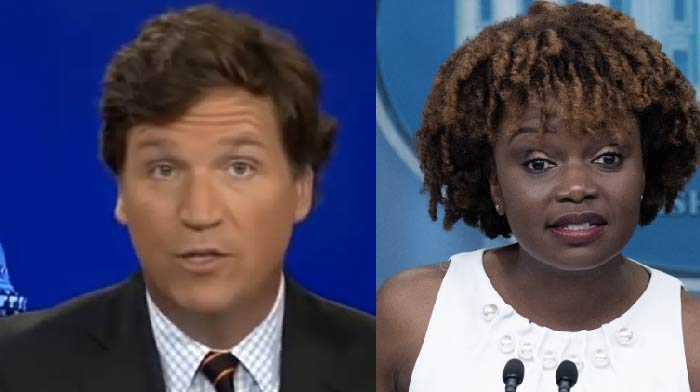 Well, the cold ice queen/Stepford Wife Jen Psaki is riding off into the sunset this month.

I can’t think of any other press secretary that was more of a shameless liar than she was.

But things are probably about to get even worse…

Jen is being replaced by Karine Jean-Pierre; a radicalized kook who spreads loads of misinformation and suffers from Stage 5 TDS.

And believe it or not, Tucker says the replacement is actually worse than the original if you can believe that one.

Yep, according to him, Pierre is even more shallow and nastier than Jen was, and she’ll be a lot more dangerous, to boot.

MORE NEWS: If You Were Suspicious About Biden’s “WH Set,” You Were Right On The Money

Bizpacreview reported that Carlson went on to mock Psaki who introduced the new spokeswoman and made the point that she is going to be the first “LGBTQ+ person to be White House press secretary.”

“What does LGBTQ+ mean? Hey, Jen Psaki, let us know if you have a minute. Explain every letter in that acronym and specifically what it signifies. We will wait. Don’t hold your breath. She’s not going to do it because like everybody else who uses that phrase, Jen Psaki literally has no idea, no clue at all what it means,” the Fox News host asserted.

“That’s why she got the job. She’s in the right group, and to the Biden administration, which thinks exclusively in terms of groups and never in terms of individuals, because individuals are messy and inconvenient, the group is all that matters. This is exactly how they pick Supreme Court justices or vice presidents or members of the Federal Reserve Board and now, the all-important press secretary gig has gone to someone on the basis of group. It’s really simple. Show us your picture, and we’ll tell you if you’re qualified for the job,” Carlson commented.

“And in many ways, Karine Jean-Pierre is perfect for the job. Not only is she a member of the out LGBTQ+ community, she’s also critically the product of a private school and an Ivy League college and yet still oppressed somehow. She is furious at America, despite her ample privilege, and enraged by its racist systems of oppression, and she’s happy to tell you about it,” he noted.

Well, we’ll see if Karine Jean-Pierre can lie and spin as good as Jen could.

Because like her or hate her, nobody could lie with such ease, as Jen Psaki.

It was like an “art form” for that wretched robotic woman.