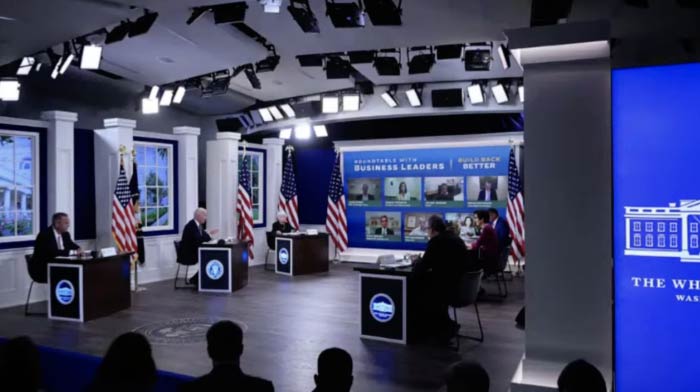 Well, everyone was right about this one…

There’s always been a lot of suspicion about why Joe Biden has a “fake WH” built where he’d hold most of his press events.

They tried to tell us it was for “COVID,” but that was obviously a ruse.

Many speculated that it had to do with teleprompters, and how Joe can’t be trusted to handle any questions off the cuff.

Well, those suspicions appear to be right.

MORE NEWS: Your Grocery Store is an “Optical Illusion” … It’s a Well-Crafted Maze Controlled By About 10 Companies

A new report claims that Joe Biden’s Handlers do not allow him to hold press events in the Oval Office where a teleprompter can’t be permanently installed.

That’s how bad things really are…

Bizpacreview reported that reporters Jonathan Lemire and Meredith McGraw revealed the details in a report on the upcoming 2024 presidential election.

Leftists have claimed from the onset that Biden needs a teleprompter due to his stutter. But many Americans wonder if it is actually due to his having memory and cognitive issues.

Biden is now 79-years-old. If he runs for reelection, he will be 81-years-old. Trump is currently 75 and will be 77 at the time of the next election. The primary difference is Trump is far more spry and quick-witted than Biden is. In other words, many voters see Biden as old and in decline but that’s not the case with Trump.

“During the 2020 campaign, there was some idle chatter in Biden’s campaign of making a one-term pledge, becoming a ‘transitional’ president who would rid the nation of Trump and then usher in a new era of Democratic leaders. But those ideas were dismissed even before Biden took the oath of office,” Lemire and McGraw noted. “Still, some allies and Democrats privately worry that Biden may not be able to handle the rigors of another campaign.”

“A bone he broke in his foot while playing with his dog in late November 2020 still occasionally bothers Biden, resulting in a slower and shorter gait. And the White House has largely abandoned using the Oval Office for press events in part because it can’t be permanently equipped with a teleprompter; Biden aides prefer the fake White House stage built in the Old Executive Office Building next door for events, sacrificing some of the power of the historic backdrop in favor of an otherwise sterile room that was outfitted with an easily read teleprompter screen,” the reporters asserted.

“And if Biden were to run again in 2024, it almost certainly would be a more rigorous campaign than the one he previously mounted. The outbreak of Covid kept Biden in his Delaware home for much of the 2020 general election campaign, sparing him the wear and tear of relentless travel,” they continued, referring to Biden’s notable absence in the public eye during the last presidential campaign.

At the bare minimum, the s0-called “president” should be able to communicate without a teleprompter, lists, or pre-determined questions by a list of hand-picked reporters.

None of this is normal.

There’s a reason that a majority of the country does not feel Biden is mentally fit to handle this job… it’s because he’s not, and everyone can see and hear it day in and day out.