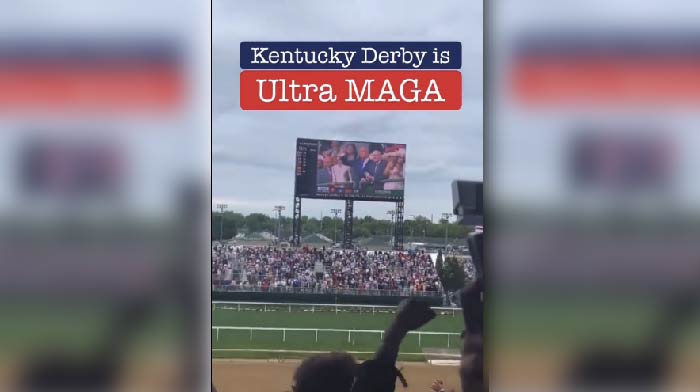 President Trump got an “Ultra MAGA” reception at the famous Kentucky Derby.

The “Ultra” is of course a nod to broken-down, battered, and feeble old Joe Biden, who is trying to paint MAGA as the most “extremist” political movement in our nation’s history.

Biden, who is still sinking in the polls like a rusty old anchor, has now labeled us “ULTRA MAGA.”

As if that’s a bad thing or something…

And much like what happened with his failed predecessor, Hillary who came up with the “Deplorables,” the MAGA movement has embraced the “ULTRA” name with great pride.

You’d think Joe would’ve learned this wasn’t a good game plan, but at this point, chances are Joe doesn’t even remember the “Deplorables” or who Hillary is.

And when the crowd at the Derby saw his image on the jumbotron, they went wild.

Trump was at the Kentucky derby today. Crowd was definitely #UltraMAGA 😁🇺🇸 pic.twitter.com/kjY2EoLoK0

President Trump and his entourage attended the legendary race in high style and it looks like they had a great time.

I am certain that President Trump greatly appreciates the support and love the American people keep showing him everywhere he goes.

That says a lot, doesn’t it?