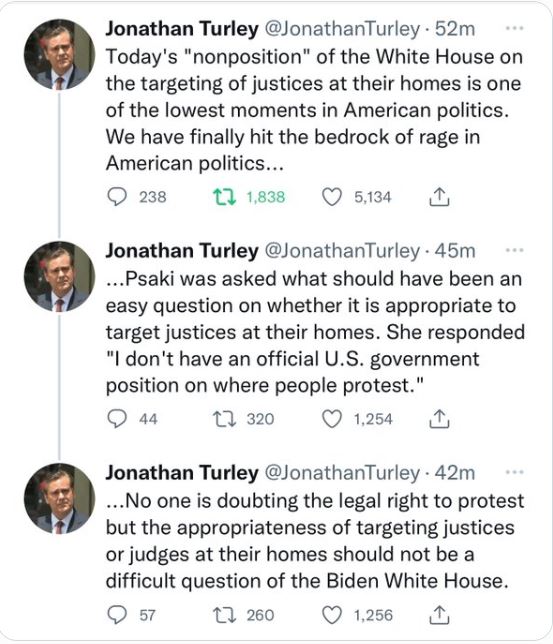 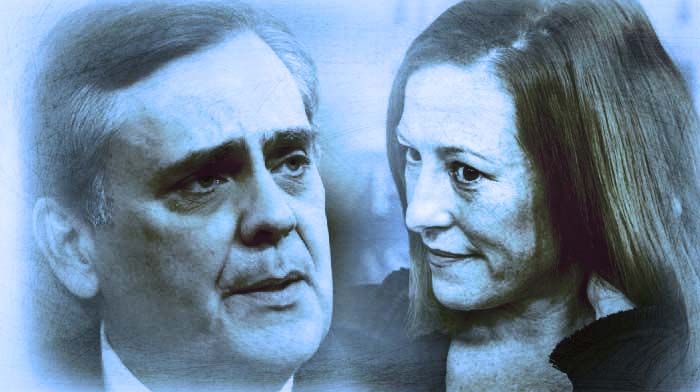 Today, when asked about how the Biden admin felt about protesters going to SCOTUS homes and targeting them, Jen Psaki, who is on her way to becoming a fake news peddler at MSNBC, claimed she didn’t have an “official US government position on where people protest.”

So, God forbid Americans to protest at the Capitol and steal Schumer’s stapler — that’s killing democracy and an official “insurrection”… But it’s A-OKAY for violent liberals, who’ve been calling for assassinations, to target SCOTUS justices now at their homes to intimidate their vote?

That’s “democracy,” according to today’s Democrat Party… Suddenly it’s okay to doxx justices and send mobs to their homes.

That’s quite a stretch, eh? You really have to twist yourself into some kind of hyper-partisan, political pretzel to make that one work, don’t you?

Well, Professor Turley is not amused, as a matter of fact, he says that Jen and this entire Biden admin have hit a “new low.”

Indeed, a dark day, filled with wild double standards that everyone is getting really sick and tired of.

“Cuz she’s a conmie bent on destroying America and replacing it with Amerika.”

“Disgusting. Uncivilized. They’re actually threatening worse should SCOTUS hold to the decision. There will be blood.”

“God Almighty is reversing this curse, and will protect the justices who will vote to protect babies. Any desperate attempt to try to intimidate them, and to change their minds is folly.”

“They play by the rules of a totalitarian regime. They’ll use whatever method to accomplish their evil plan”

Please read that last line above, once again.

It’s so true, and every conservative needs to understand this, and fight back accordingly.

We can’t play the “high road” game anymore. We need to battle back against the communist left as hard and as nasty as they fight us — harder and nastier — if we have any hope of winning back the soul of this country.

This is a good vs evil spiritual battle, and Christians need to fight with righteous indignation and fury.