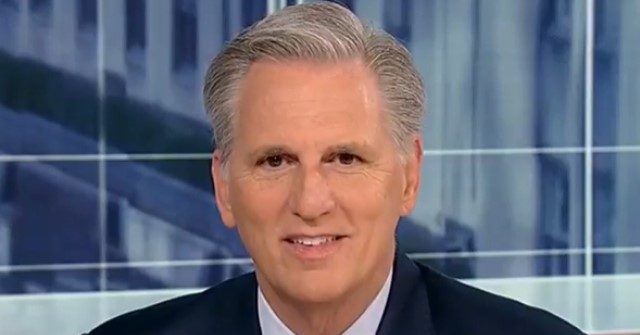 On Friday’s broadcast of the Fox News Channel’s “Jesse Watters Primetime,” House Minority Leader Rep. Kevin McCarthy (R-CA) said that he believes the Biden administration is attempting “to bring Iranian oil back in” with the Iran deal negotiations.

McCarthy stated, [relevant remarks begin around 2:30] “I just sent a letter to Secretary Blinken about the Iran agreement. What I believe they’re really trying to do — and why don’t we know what’s in it, but we have Russia and China knowing what’s in it — to bring Iranian oil back in. Why would you fund another country that funds terrorism, that wants to have a nuclear weapon, give it to them, and then give them billions of dollars?”

McCarthy answered, “That’s right. And you know what you get when you get American oil? It’s cleaner, they’re American jobs, and the world is safer.”

He later added that Biden ought to “speed up the weapons for Taiwan to defend themselves as well. But what is he talking about? He’s working with China and Russia to bring Iran back into the world economy, give them billions of dollars, and give them a nuclear weapon.”