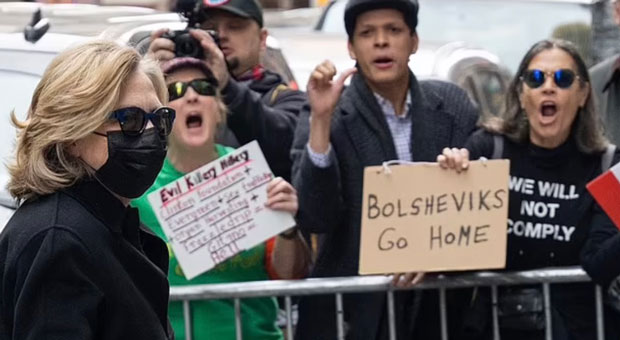 Hillary Clinton was mobbed by protesters as she arrived for her huge “comeback” speech on the Democratic Convention in New York City.

Crowds heckled and booed the twice-failed Democrat presidential candidate and chanted “lock her up!”

As she arrived on the Sheraton Hotel in Times Square, protesters might be heard yelling “criminal,” whereas others shouted obscenities corresponding to “b**ch” and “w**re.”

Other demonstrators held indicators with slogans corresponding to “Evil Killery Hillary” alongside banners of assist for Candanian Freedom Convoy protesters.

Hillary used her speech on the DNC to answer allegations towards her in the explosive courtroom submitting from Special Counsel John Durham.

She claimed the allegations are “fake” and blamed President Donald Trump and Republicans for the scandal.

Clinton stated throughout her speech:

“It’s humorous, the extra hassle Trump will get into, the wilder the costs and conspiracy theories about me appear to get.

“We should reject the large lie concerning the 2020 election and the quilt-up of the revolt of final January 6.

Hillary Clinton fires pictures at Fox News: ‘It’s humorous, the extra hassle Trump will get into, the wilder the costs and conspiracy theories about me appear to get’ pic.twitter.com/qI5teT7Vjt

“Trump & Fox are desperately spinning up a pretend scandal to distract from his actual ones,” she stated.

“The extra his misdeeds are uncovered, the extra they lie.

“For those interested in reality, here’s a good debunking of their latest nonsense.”

However, journalist Glenn Greenwald picked up on her worry, saying:

“Hillary Clinton’s lawyer has been criminally indicted by the Durham probe for mendacity to the FBI about Russiagate/Alfa Bank.

“An FBI lawyer pled responsible to mendacity to the FISA courtroom to spy on Carter Page.

“Nothing Hillary or Dems’ media servants can say will ever negate these facts.”

[RELATED] Trump Says He Knew Democrats Were Spying on Him: ‘The Wires Were Burning Up!’