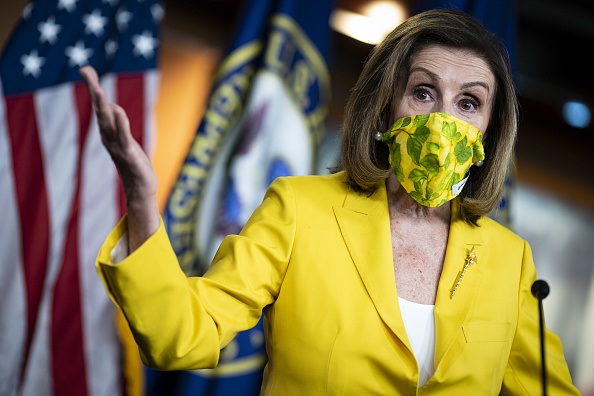 What will be the runner-up in D.C.’s checklist of dumbest headlines this week, House Speaker Nancy Pelosi known as House Minority Leader Kevin McCarthy a “moron” because of glib accusations of anti-science rhetoric coming from the GOP.

Seen leaving the Capitol, Speaker Pelosi was requested about Minority Leader McCarthy’s critique of a returning to a masks mandate, primarily based on a Capitol Physician’s announcement, that’s been closely touted by Democrats.

Pelosi slighted McCarthy by saying, “He’s such a moron.”

“Make no mistake — The threat of bringing masks back is not a decision based on science, but a decision conjured up by liberal government officials who want to continue to live in a perpetual pandemic state.”

During a follow-up interview, Speaker Pelosi was requested about her mockery of McCarthy, the place she repeatedly chanted “science” because the default reply for all moments of disaster or query.

Leaning on an accusation that Republicans counter the place of “science” — outlined by the CDC’s opinion — after refusing to put on masks on Wednesday, Speaker Pelosi’s aggressive take towards her political opposites continues in pattern since her first declarations from Chinatown in 2020.

Only days faraway from ruling that said vaccinated Americans can drop masks sporting after their vaccine, D.C. management and Nancy Pelosi’s push for masks mandates is carried with low confidence in optimistic consequence, with a lack of knowledge to indicate for it.

A report from Townhall highlighted “findings do not support the hypothesis that SARS-CoV-2 transmission rates decrease with greater public mask use.”

McCarthy and Texas Rep. Chip Roy made the information for talking out towards the masks mandate after calling the ruling a blockade of their path to meet constitutional duties. Ted Cruz criticized the vaccine’s heightened media marketing campaign, that declared transmissibility a non-issue if people have been to be absolutely vaccinated, which has now seen a false promise of freedom for vaccinated Americans.