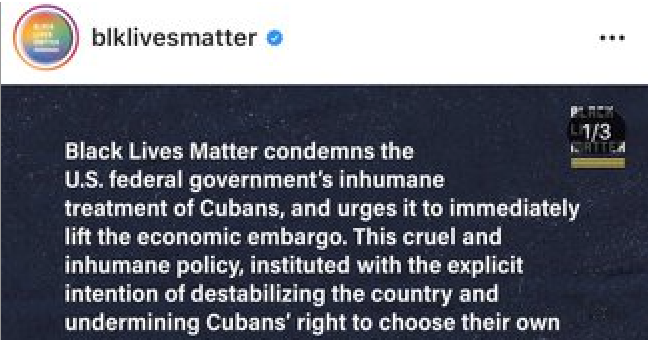 In a press release launched Wednesday night time, Black Lives Matter threw its assist behind the Cuban authorities in its battle to keep up its communist management over its residents. If there was ever doubt that BLM loves communism, this could finish the dialog.

“The people of Cuba are being punished by the U.S. government because the country has maintained its commitment to sovereignty and self-determination,” BLM writes in its wealthy assertion. “United States leaders have tried to crush this Revolution for decades. Instead of international amity, respect, and goodwill, the U.S. government has only instigated suffering for the country’s 11 million people – of which 4 million are Black and Brown.”

Let’s not overlook that that is the group that so many American corporations have thrown their assist behind. Like the NBA. MLB. Let’s additionally keep in mind that MLB put ‘BLM’ on mounds across the league. On Opening Day! Yes, the identical league the place some workers have risked their lives to flee the communist regime and right here we’re with BLM now throwing it’s full assist behind Cuban management and chastising the U.S. authorities.

Rob Manfred deserves this pretzel being served up by these idiots.

“The extortionist ring known as the Black Lives Matter organization took a break today from shaking down corporations for millions & buying themselves mansions to share their support for the Communist regime in #Cuba,” Marco Rubio tweeted.

Of course Marco’s speaking about one BLM co-fouder who went out and purchased 4 homes. Expensive homes.

“It has brutalized & denied freedom to generations of Cubans, and forced my family & so many others to flee,” Sen. Ted Cruz mentioned of the Cuban Communist Party. “The American people stand squarely with the men & women of Cuba and their noble fight for liberty.”

A majority of @MLB groups had “BLM” stenciled on the pitcher’s mound yesterday/right now. Four groups, together with the @Rangers, didn’t – opting as an alternative for “United For Change.” #OpeningDay pic.twitter.com/LFe7SKS412