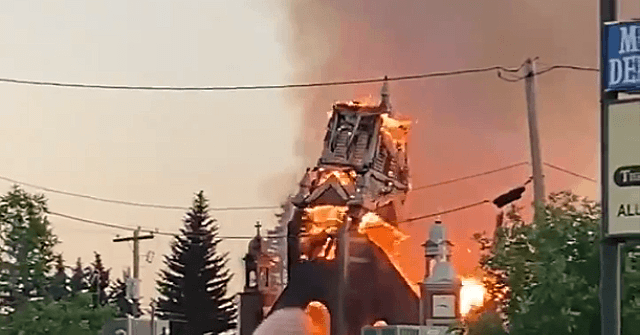 Prime Minister Justin Trudeau has issued a extremely equivocal denunciation of the wave of church arsons and statue-smashing sweeping Canada, calling the assaults “unacceptable” however defending the anger fueling them as “fully understandable”.

Trudeau, who leads the Liberal Party of Canada, instructed reporters it’s “unacceptable and wrong that acts of vandalism and arson are being seen across the country including against Catholic churches” — however instantly added that “One of my reflections is I understand the anger that’s out there against the federal government, against institutions like the Catholic church; it is real and it is fully understandable given the shameful history that we are all becoming more and more aware of, and engaging ourselves to do better as Canadians.”

The Canadian leftist did go on to say that he couldn’t “help but think that burning down churches is actually depriving people who are in need of grieving and healing and mourning from places where they can actually grieve and reflect and look for support.”

“We shouldn’t be lashing out at buildings that can provide solace to some of our fellow citizens, but we should be every day committing ourselves, each and every one of us, to the hard work we need to do to actually rebuild a path forward that reflects the terrible intergenerational trauma and present-day realities of suffering that we are all collectively responsible for,” he added.

“A typical Trudeau ‘condemnation’, where he briefly says this behaviour is not really on, but then goes on at length to explain why it’s understandable and to sympathise with those who did it,” remarked Robert Poll, of the Save Our Statues marketing campaign.

PHOTOS/VIDEO: Mounties in Morinville say they have been known as to the hearth at St. Jean Baptiste church round 3:20 a.m. Wednesday. https://t.co/YZliDzWzQH pic.twitter.com/mIL6nCgV0d

Canadian church buildings, principally Roman Catholic and Anglican and sometimes historic, have been burned down or vandalised in remarkable numbers in latest days, as anger has been whipped up over the invention of unmarked graved — usually wrongly described as “mass graves” by the mainstream media — on the websites of former Indian Residential Schools; establishments usually run by church buildings which the federal government used to require First Nations youngsters to attend, in what’s now seen as a misguided effort to combine them into the cultural mainstream.

The colleges date again to the 1800s, and no less than a number of the graves have been marked at one time, with the BBC noting that “Burial plots used to be marked with wooden crosses that crumbled over the years” on the former St Eugene’s Mission School close to Cranbrook, British Columbia, for instance.

Mobs have additionally focused historic statues, with monuments to Queen Elizabeth II, who’s head of state in Canada as in Britain and a number of other different Commonwealth realms, and her ancestor Queen Victoria being ripped down in dramatic vogue in entrance of the Manitoba Legislature, which little obvious intervention by the authorities.

The head of the statue of Victoria was eliminated and extensively vandalised earlier than being thrown in a river, with a statue of the storied British explorer Captain James Cook which was violently torn down in British Columbia additionally being symbolically “drowned”.