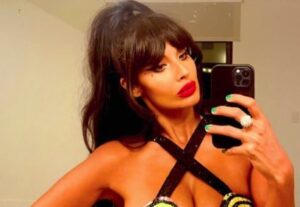 Actress Jameela Jamil is willing to put her entire body into a role. Even parts of her body that she didn’t know existed.

The 36-year-old did her own stunts for her latest role in the Marvel Studios series She-Hulk: Attorney at Law.

Jamil told Entertainment Tonight that she pulled a muscle that she didn’t even know existed.

“Oh, I did it all! I did it all,” she told ET at the Hollywood premiere. “I was hurting in place that I really didn’t know exists.”

“Like, you’ll probably have to bleep this out, but I pulled a muscle in my a**hole,” she added. “I didn’t know that was possible!”

She’s not the only one that didn’t know that was possible. Count me among those who didn’t know you could pull a muscle there.

We now know how much Jamil put into bringing the role to life.

The injury wasn’t the only thing she took away from doing all of her own stunts. She learned “jiu jitsu and kung fu and combat in the air.”

Although she admitted with CGI that she doesn’t know how much of her stunt work made it into the final product.

She-Hulk: Attorney at Law premieres on August 18 on Disney+. Mark Ruffalo and Tatiana Maslany also star in the Marvel Studios series. Check out the official trailer below:

The post ‘She-Hulk’ Actress Suffered A NSFW Injury Doing Her Own Stunts appeared first on OutKick.